One of the pioneers of women’s sabre fencing

Denise Banks is truly one of the pioneers of women’s sabre fencing, seeing that the sport was opened to women only 10 years ago. She must have inherited her passion for fencing from her grandfather, Joseph Banks, who was a fencer in Brazil in the early 1920s. Denise started fencing with the University of Toronto in 1992, and earned a spot with the Varsity Blues men’s sabre team in 1994-95. She acquired her technical coaching certificate in 1994. The year 1997 was a stellar one for Denise. She won bronze at both the Canadian Nationals and at the Ontario championships, a silver medal at the Governor General Tournament in Ottawa, gold at the York Invitational Team Tournament and gold again at the Royal Military College Invitational Team Tournament. She finished the year ranked fourth in Canada. That same year, she joined the Professional Fencing League where she finished in the top half at her second North American Cup tournament in Palm Springs. In 1998, Denise and her teammates from Beach’s Sabre Club captured the Canadian National Fencing Championship gold medal, defeating Quebec, in the first-ever women’s team sabre event at that competition. At an open competition in Boston, Denise finished in the top eight among Canadian and U.S. fencers. A Canada-U.S. bout was held during the event, and she and her teammates were victorious. Later that year, she once again attended the RMC Invitational. Although she tore ligaments in her calf, she continued on to help her team win the gold medal. After months of therapy and healing, she recovered fully but has not fenced competitively since. Denise, who works with Bombardier Transportation in North York, continues to fence, judge and coach. She hopes some day to see women’s sabre become an Olympic sport. Maybe then she will resume her competitive career. 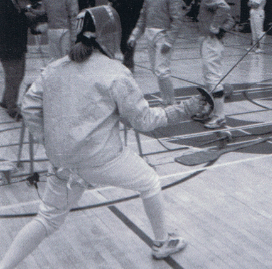