To say that Jeff Bell is an athlete may be the understatement of the day. He has excelled in athletics since his days at elementary school in Port McNicoll. Jeff participated in every, sport he could, including track and field, cross-country running, volleyball and basketball. His basketball team won the Simcoe County elementary championships in 1980. During his five years at Midland Secondary School he played on the golf, volleyball, basketball and track and field teams. His accomplishments included three GBSSA volleyball titles, two basketball titles, and a number of Huronia team golf championships. Jeff competed at the OFSSA Regional track and field meets in the Long Jump, Triple Jump and as a member of the 4 x 100 metre relay team. In 1986 he was voted the Most Valuable Player of the Junior Boys Basketball team and a year later was named Senior Male Athlete. During his University days, Jeff was a member of the University of Guelph Gryphons volleyball team. From 1987-1991, Jeff was starting setter and co-captain of the Gryphons. In 1988, his year was highlighted with a trip to the CIAU volleyball championships. The following year he was named to the all-star team at the Queen’s University Invitational Tournament. Jeff began playing Fastball for the Port McNicoll Pirates and later moved to Midland winning league championships in 1991 and 1993. In 1994, he again won playing for the Victoria Harbour IGA. That same year he was also a member of Minesing Queens Hotel, which captured the Barrie Fastball league championship. Jeff has participated in a number of Provincial Championships in fastball. He has two silver medals from 1992 and 1995 and a gold medal from 1993. During the 1993 championships Jeff was named Most Valuable Player and was crowned the Batting Champion with an average of .786. Jeff has been a long time member of local golf courses and currently serves on the Board of Directors at the Midland Golf and Country Club. In 1995, Jeff teamed with his mother, Lynn Morton, to win the Ontario Golf Association’s Mother/Son tournament. Jeff has continued with local athletics as a referee and coach. He is a member of the Barrie Basketball Officials board and is a provincially rated Volleyball Official. In 1995, he helped organize and co coach the Midland Magic Bantam Boys Basketball team. His teams captured silver medals at the Provincial finals in 1996 and 1998. 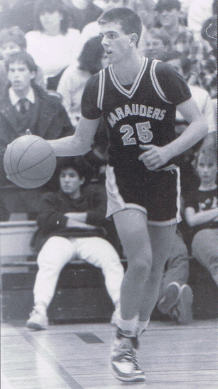