Clarence Day got the nickname “Hap” or “Happy” because of his outgoing personality and sense of humour. He had a lot to be happy about, particularly in his sporting life. He and his family came to North Simcoe from Owen Sound in the first decade of the 20th Century and settled in Port McNicoll. His formative hockey skills, says Thomas Paradis, who co-nominated Day for the Hall of Fame, were learned on the natural ice of Day’s Road in that village. Day was a student of Midland High School trom approximately 1914 until 1920. During this time he skated for the Midland Juniors, believed to be his first OHA team. He went on to play for the semi-pro Hamilton Tigers before studying pharmacy at the University of Toronto. He debuted with the Toronto St. Pats in 1924, and enjoyed 33 years in pro hockey as a player, coach, referee and general manager. A defence partner of King Clancy, he was the captain of the first Toronto Maple Leafs team to win the Stanley Cup in 1932. He played in the NHL until 1938. He then became a referee for two seasons, before turning to coaching. He was the bench boss of the Leafs for five Stanley Cups, including three in a row. He became the Leafs’ general manager in 1950 and retired in 1957 to go into business. Hap Day was inducted into the Hockey Hall of Fame in 1961. Despite his success in pro hockey, he continued to return to Midland and Huronia. 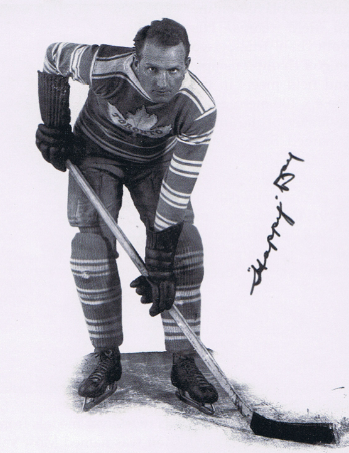