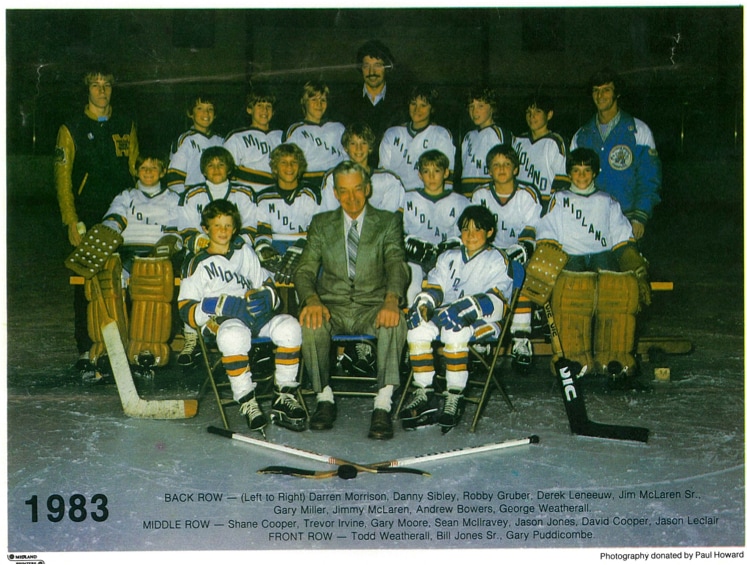 The team had a strong season within the Georgian Bay loop and was successful in tournament play winning the prestigious Penetanguishene Winterama Atom Tournament and the Parry Sound 30,000 Island Tournament. Their highlight was at the Regional Silver Stick Tournament in Midland. The team took top spot after having to play a tough Bolton team and initially defeating them 4 -1 in the round robin and 1-0 in the final to qualify them to play in the International Silver Stick Tournament in Sarnia.

In Sarnia they went through the qualifying rounds of the ‘A’ Division with decisive wins over Sarnia and Mooretown and advanced to the final only to play Bolton again. The game was hard fought with Bolton jumping out in front in the first period with a one goal lead. In the second period Midland rebounded to tie the game and it remained that way for the third period and the first overtime period. The second overtime was hard fought with stellar goaltending at each end as both teams had scoring opportunities. With 2:39 remaining Midland broke up a play in their end and with a breakout pass, a two on one was created and the resulting feather pass saw the puck being slipped between the goalies legs.

Bill Jones Sr. said “it was the highlight of his career”. Coach Weatherell was proud of his team’s efforts and summed up the boys performance with “They really wanted it, that’s all there was to it”. Back in Midland they were escorted through town by the Midland Fire Department and later at an Intermediate game the team was honoured with certificates from the local Member of Provincial Parliament, Al. McLean.