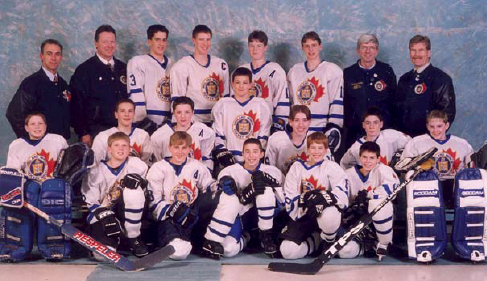 The Peewee Rep Team of 1998‐99 was sponsored by a local business, Midland Champion Engravers and Trophies. That year there seemed to be a bountiful crop of young players rising out of the Midland Minor Hockey system, which made choosing the team an arduous task for the coaches and managers, but by October of ’98 the team was ready to roll in the Georgian Bay League by soundly defeating the Stayner Rep team, 9‐4. From there on, the team did not look back and while playing their league rivals of Collingwood, Stayner, Essa, Oro, Shelburne, Wasaga Beach, Meaford and Elmvale they were the Georgian Bay League Champs compiling an impressive 16‐1‐1 record for a .900 winning percentage. Their prowess on the ice was reflected with their typical high scoring games while their goal tending was stingy, allowing few to cross the red line. During their regular season play they had the benefit of the Midland Minor Hockey system depth to call upon as many times injuries or suspensions necessitated call ups.

Aside from the league play they participated in the Robinson Peewee Rep Major ‘A’ Tournament in Bradford where they lost to Huntsville in the opener and then went on to win games against East Gwillimbury and Vaughan. By having scored the most goals in the tournament, the Midland team won its pool and advanced to the finals against the host Bradford team where they romped to a decisive 8‐3 win. The annual Midland Regional Silver Stick saw Midland Champion Engravers and Trophies Peewee Rep Team post decisive wins in their division against Owen Sound, 7‐3; Orillia, 4‐1 and Barrie, 9‐0. Due to their winloss records, Midland met Owen Sound in the finals with the home team winning in a convincing fashion, defeating Owen Sound 4‐1, advancing them to the International Silver Stick Tournament in Port Huron, Michigan. At the Port Huron finals they won handily over Glen Ellyn from Illinois (9‐1), the Chesapeake Chiefs from Maryland (9‐2) and as a result of winning their division they advanced to the quarter finals against Keswick winning 2‐1. Moving onto the semi‐final game against Bradford, they won 5‐2 only to lose in the final game. Their International Silver Stick Peewee ‘A’ Finalist banner proudly hangs in the Midland Centennial Arena.

The culmination of their season came while playing in the OMHA Championship play downs. Midland’s first round opponents were Prince Edward County where they won the best of five series in three games straight. The second round against Southport (Southampton and Port Elgin) saw another decisive three game sweep which advanced them to the all Ontario finals against Tillsonburg. The series opened in Tillsonburg where Midland triumphed with a 5‐2 win in the Saturday game. The Sunday game was a hard fought battle that went into overtime, had teams pulling goalies and saw a penalty shot that tied the game 6‐6. As a result of the tie game, the series then shifted to a total point format where the first team to gain six points would be declared the winner. The following weekend game in Midland saw the team take a commanding lead in the series with a 6‐4 win while Sundays game back in Tillsonburg saw them drop a 6‐5 overtime loss to bring the series back home. The series point differential was 5 for Midland and 3 for Tillsonburg with only a tie needed for Midlands victory. As the Midland Centennial Arena was pre‐booked, the final game was played in neighbouring Penetanguishene’s Arena where after three hard fought periods, overtime was needed to secure the Midland Champion Engravers and Trophies Peewee Rep Team OMHA Peewee ‘BB’ Championship. The roster included the players: Kyle Blake, Andrew Brayson, Mark Bremner, Adam Chambers, Luke Dubbin, L.J. Gagnon, Stuart Battrick, Ryan Grimshaw, Kyle Guthrie, Andrew Leduc, Terry Major, Tyler McKelvey, Mike Morris, Chris Prout, Wayne Prusky, Kyle Tindale and Sean Toole; and the Coaches and Executive: Bruce Guthrie, Jeff McKelvey, Brian Milligan, Tim Toole and Dave Leduc.