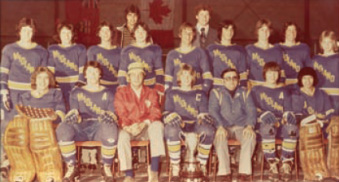 The 1977-1978 Midland Junior Civitan Major Bantams finished atop the regular-season standings in the Georgian Bay Minor Hockey Association, outdistancing their rivals from Owen Sound, Collingwood, Base Borden and Penetanguishene. Their quest for an Ontario Minor Hockey League Association championship began when they defeated Collingwood two games to none in the best-of-three Georgian Bay group playoff.

From there, the Junior Civitans needed four games to push past Aurora in the next playoff round—a best-of-five series called the OMHA elimination series–including winning Game Two 8-6 in overtime. Aurora won 2-1 in the third game but Midland crushed them 7-1 in the fourth game to win the series. That victory advanced them into the best-of-five OMHA quarterfinals where the Junior Civitans beat Hespeler (now part of Cambridge) in three straight games.

For the upcoming semi-finals, they prepared to face the defending Ontario champions from Lindsay, the team that had bounced them from the previous year’s semifinals. But this year, the tables were turned as Midland swept the defending champs in three straight games. With that victory, the Junior Civitan Major Bantams became the first minor hockey team from the town in 16 years to reach the Ontario championship final. But things got off to a rocky start as Salt Fleet (near Hamilton) doubled Midland 6-3 in the opening game.

Thus far during the season, the team had been forced to play its home games at the Wasaga Beach Arena due to the fact that fire had destroyed the Midland Arena Gardens in July 1976. By happy coincidence, the new Centennial Arena opened on April 2, 1978, just in time for the Junior Civitans’ second game against Salt Fleet. It was “standing-room only” that Sunday afternoon as local hockey legend Sib Brodeur dropped the ceremonial puck and then watched his grandson, Midland captain Pat Brodeur, score the game’s first goal just 54 seconds into the game. That lead wouldn’t last long, however, as Salt Fleet built a 4-1 lead early in the second period. But the game was far from over as Midland, with Brodeur contributing an eventual hat trick, won 9-8 in overtime.

Game Three (at least from Midland’s perspective) was less exciting, with Salt Fleet winning 5-3 at home, but the next day, back in the new Centennial Arena, Midland came out on top 6-3. They built on that momentum in Game Five, as Brodeur once again had a hat trick in Midland’s 5-2 victory. The Junior Civitans, it seemed, couldn’t win on Salt Fleet’s ice and that trend continued in Game Six as they were shut out 4-0, but Game Seven would be back home, and that boded well. Until, that is, it was discovered that a malfunctioning ice-making machine at the new arena had forced the deciding game to be played in Wasaga Beach. But the Junior Civitans were just as comfortable there, if not more so, and eked out a 4-3 victory to claim the Ontario crown.

“If there’s one thing that sums up the season, it’s got to be the boys,” Coach Bob Colbourne said at the time. “They’re the only ones who can decide what happens on the ice and with as limited an opportunity as we had to work with them, not having an arena (in Midland), they were able to learn what they were shown and come this far.”