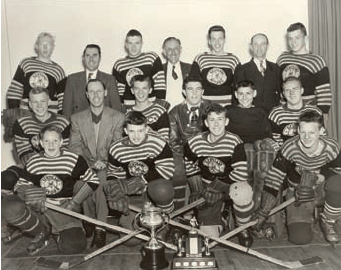 Heading into the 1948-1949 Georgian Bay Minor Hockey Association season, the Midland Sheet Metals Midgets had so completely dominated the league that the squad was split into two: The more experienced players made up the “A”s and the “green but eager” newcomers were the “B” team. The “A”s won the regular-season title with ease and then defeated the “B”s in the semi- final before beating Elmvale in the final.

The Sheet Metals then moved on to the Ontario Minor Hockey Association group playoff, where they trounced Collingwood 11 goals to two in the two-game total-point contest. Next up were the Penetanguishene Huronians, the only obstacle between Midland and the OMHA’s third playoff round. They weren’t much of an obstacle as it turned out, as the Sheet Metals won the two-game total point series 13 goals to six.

Game One of the OMHA semi-final between the Sheet Metals and the Belleville Gunners saw Midland lose 7-3 but it was discovered after the game that Belleville had used an over-aged player. As a result, that game was forgotten and the next one, at the Midland Arena Gardens, would be a sudden-death playoff. Through most of the third period, the score was deadlocked at 5-5 until Ken Webb scored at 13:53 to make it 6-5. Three more quick goals by the Sheet Metals moved them on to the Ontario final against the Paris Comets.

The championship series kicked off at the Arena Gardens and the Sheet Metals fed off the hometown crowd, destroying Paris 11-3. Two nights later, the roles were reversed as, before a pro-Paris crowd in Hespeler (now part of Cambridge), the Comets crushed Midland 10-4. But that advantage didn’t last long as, on the return to Hespeler for the third game, the Sheet Metals exploded for a 14-4 victory. Game Four was again in Midland, where the Sheet Metals played their young hearts out to register a decisive 5-2 victory to win the Ontario title three games to one.

Local sports historian Thomas Paradis, who nominated the Sheet Metals to the Midland Sports Hall of Fame, notes that the core players on this team would go on to play prominent roles on other notable Midland teams in the coming years, calling it “a golden age” for Midland hockey.

“Together, as a group, the Sheet Metal Midgets accomplished the unique feat of continuing the high standard of achievement set amidst that incomparable decade in Midland’s sports history,” says Paradis, “while obtaining glory themselves and bringing honour and pride to this small Georgian Bay town.”