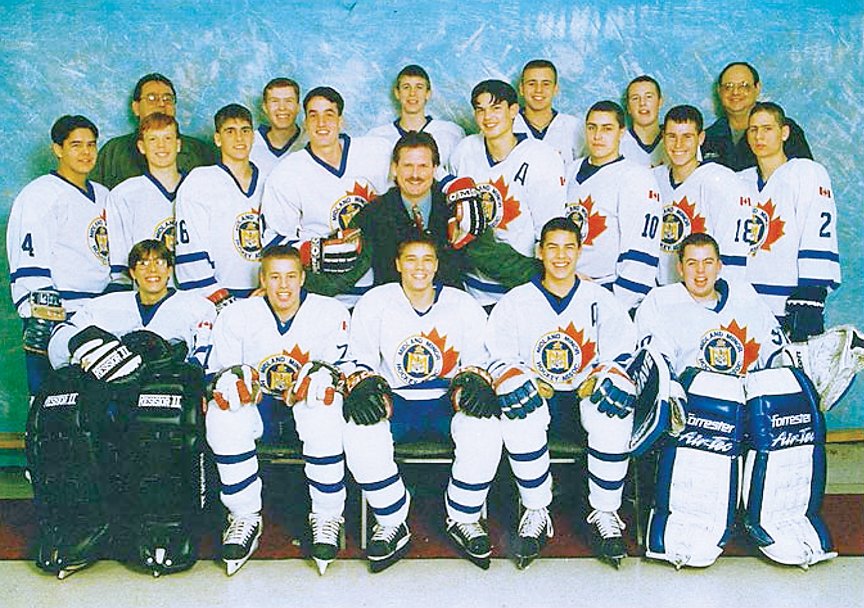 In 1995 Midland Minor Hockey Association appointed Bruce Murdock and Hugh Robertson as coaches for the forthcoming season for the Midget Rep hockey team sponsored by the Midland Legion Branch 80. They in turn engaged Jim Monteith, Bryan MacKell and Bill ‘Scotty’ Brown for the positions of manager, scout and trainer.

The training camp had a large turnout of experienced players from the local hockey association as well as skaters from Coldwater.  The preseason exhibition games provided a glimpse of what was to come as the talent on the ice fared well against some stiff completion from other centres within the Georgian Bay loop. As the season started the team started to gel. Wins were earned as they had a team effort with a solid defence and prolific scoring. Game suspensions and injuries didn’t slow the team down as they managed to play strong team hockey assisted with some call ups from the minor hockey system. In the late fall they entered an ‘A’ Midget tournament in Oshawa and in the opening game they handily defeated the host team by a substantial margin, only to lose the second game then bouncing back to win the third game and the championship game. They played in the Midland Silver Stick Tournament only to lose to Woolwich who eventually went on to represent the area in the Port Huron championship. As the season ended the team was near the top of their game and playing strong hockey as they started into the provincial play downs. As a primer for the playoffs the entered and won the North Bay Midget Tournament.

​In the Ontario Minor Hockey Association ‘BB’ playoffs the team played Nobleton. The first two games were rough with several match suspensions being handed out to the winning Midland team and in the third game, the depleted squad soundly swept the opponents with stellar goaltending and an outburst of goal production. The final series opened up in St. Thomas with Midland winning both games. On the return to the home rink, Midland lost the third game on Friday night only to close out the series on the Saturday evening in a spectacular manor in front of 400 fans.

After the game the Coach admitted that “we’ve been a third period club all year long, but the talent came through, as it always does, which speaks to the 55-4-2 season record”. The talent on this team was evident as 10 of the players suited up the following season for the Midland Thunder Jr. ‘C’ club, with eventually three of those players going on to play in the Metro Toronto Jr. ‘A’ league; one receiving a scholarship to a major US university, another achieving success at the college varsity hockey level and a third playing professional hockey including the American Hockey League.