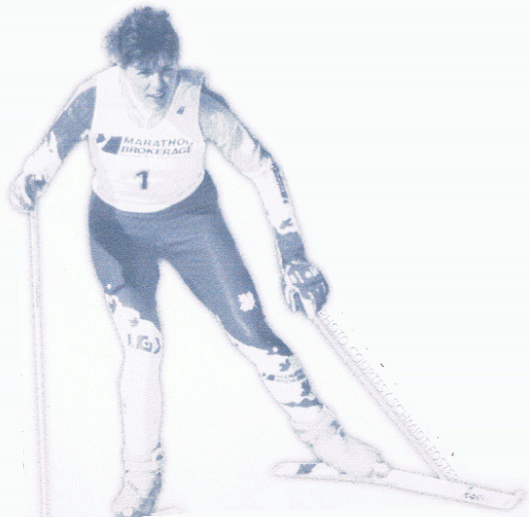 Angela Schmidt-Foster, for thirteen seasons, was the predominate women’s cross-country skier in Canada. She represented Canada at four Olympic Winter Games and as many World Championships. She said once, -When you’re competing overseas, you know you’re representing your home.” Originally from Woodstock, Ontario, Schmidt-Foster moved at age 10 with her family to Honey Harbour. and later enrolled at Midland Secondary School. While attending MSS, a teacher and skiing coach at the school, Elmer Vuorimaki, suggested to Angela Schmidt, a cross-country runner, the notion of her trying off season cross-country skiing to, as she says, “keep me in shape for track and field in the spring.” “I put on my first pair of cross country skis at Mountain View (Ski Hills), and Don (Foster) was standing right there watching me.” It was 1974. The same Don Foster, Ontario’s leading senior men’s cross country skier during the late 1970’s, would soon become Schmidt’s coach. Angela Schmidt. within two years, would join the National Cross Country Ski Team, at just 16 years old. What followed was a fusillade of Angela’s earliest skiing realizations on an international tier: top Canadian Junior, 1977-79 and Canada’s highest ranking – 17th place. 5 km classic — at the 1979 Mont Ste. Anne. Quebec. Junior World Championships. A prelude of events to come. Her first Olympics 1980. By a were in happy coincidence, that year she chose Midland for home and accelerated her amateur status. “My successes were a combination of my ability, the support given me. commitment and determination.” There would be three more Winter Olympics after Lake Placid for Angela Schmidt-Foster: Sarajevo, 1984; the 1988 games in Calgary and in 1992, Albertville. Between the Olympic years were her four World Championship competitions —1982, Holmenkollen. Norway; Oberstdorf, Germany in 1986: Lahti, Finland, 1989 and 1991 in Italy, at Val di Fiemme. Yet it’s in Canada where she had the finest individual result of her remarkable tenure on the World Cup Circuit. Competing in a 1987 pre-Olympics meet at Canmore, Alberta, she placed third in the event’s 10 km classic. Her endeavor made Canadian sports history: the first time that a Canadian had broken into the top three standings for a World Cup race. The next day, as part of the Canadian 4 x 5 km relay team, she finished second. In all, 16 years as a member of Canada’s National Cross Country Ski Team — from 1976 to 1992 — and for most of it Schmidt-Foster invariably was the highest finishing North American and Canadian racer during , international meets. There were other outstanding moments, such as her top-20 finishes at Obstertdorf and Val di Fiemme and her receiving (in 1991) the Ken Lotion Award of Excellence “as the sport’s (cross – country skiing’s) most outstanding woman” in Canada. A grateful Tiny Township renamed a road in her honor at the west side at the junction of Highway 93 and Highway 12 just outside Midland. Angela Schmidt-Foster retired from competitive cross-country skiing in 1993. Her personal skiing coach of 22 years, Don Foster, is now her husband. The couple married in 1985 and had a baby boy in August, 1996.