She Always Gave Her Team a Chance to Win

The dominant woman pitcher of her era, Muriel Lamb (nee Rawn) reached the peak of her success when Midland softball teams captured back-to-back Ontario championships during the early 1950’s. In 1952, Muriel pitched both games of a double-header, defeating Newmarket Dixons 6-5 and 11-5. and the Midland Monarchs repeated as Provincial Women’s Softball Union champions. A year earlier, the Monarchs were triple-crown winners. Having Lamb as its ace. Midland won the PWSU Intermediate B title and the Copaco Trophy for the Simcoe County women’s softball district. The club was also winner of the Barrie and District Ladies Softball League. Muriel’s pitching always improved her teammates’ chances to triumph. For instance, during the 1951 championship season, the 29-year-old righthander achieved a record of 15 wins, five losses and one tie, for a .750 winning percentage. Over a span of 21 games, she averaged seven strike outs, accumulating 151 Ks in total. Born in 1922, she grew up Muriel Rawn in Wyebridge. Her parents owned the general store in the village and it’s in Wyebridge that she learned to pitch softball. From 1948 to 1952, Muriel excelled at the sport for winning Midland teams such as the Parksides, Merchants and Monarchs. Parksides were Barrie and district champions in 1948; the following year the Merchants tasted their first major victory when they captured the Copaco trophy. Her athletic career in Midland ended shortly after 1952. During her softball days she became a teacher, and when she moved to Barrie with her husband, the late Phil Lamb, Muriel went to teach in the city at the Hillcrest Public School. Earlier, her first teaching job was near her Wyebridge home, educating children from grades 1 to 8 at Evergreen School, a one-room schoolhouse. She taught elementary school for 25 years until her sudden death in 1971. She continued her involvement with softball as coach of a Barrie women’s team, coincidentally called the Monarchs. 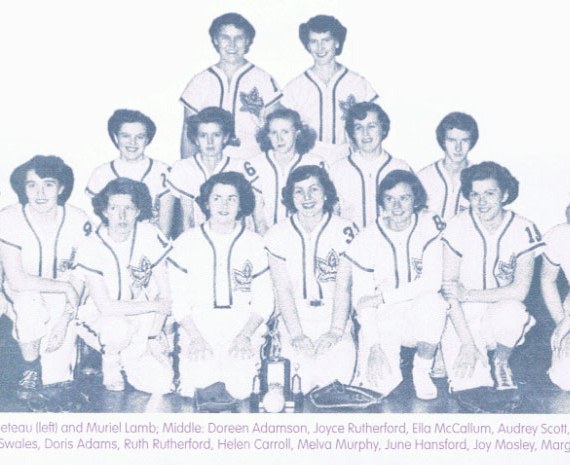