Quite simply, Felix Cappella was the superior race-walker in Canada from 1964 to 1971. During each of those eight years, Cappella .. was consistently Canadian champion in either the 20 kilometre, 50 kilometre or 20-mile distances. Sometimes he triumphed in more than one event. A determined competitor. Cappella routinely defeated well-known rivals Alex Oakley and Karl Merschenz in races throughout his era. He set national records: represented the country at the Mexico City Olympics of 1968; and medalled twice at the 1967 Pan-American boames, all as a resident of Midland. Born in Fara Sabina. Italy, Cappella entered the Italian armed forces where, from 1951 to 1955, he was a paratrooper and non-commissioned officer. While there, Cappella first tried walk-racing. His commanding officer recognized Cappella’s talent and convinced him that as a race-walker he could win points for the Italian Parachute Training Centre Athletic Club. Cappella walked in just one race. That was the only race- walking experience for him in his native country. In 1955, Cappella immigrated to Canada, settling in Ajax, and he would not return to the sport until 1961. The year he moved to Midland — 1962 — Cappella placed third to American Ron Laird in the open United States 50 kilometre walk-race championship held in Queens, New York. His first big win was at the initial Eastern Canada meet, in 1963. By 1964, he captured his first Canadian championship, winning the 20 kilometre event. Defeating Karl Merschenz of Toronto, he repeated in 1965. At 36 years of age. Cappella had the best-ever time in Canada for the 20-mile walk. His time of 2:39:8 at the national championship at Toronto’s York Univeristy in 1966 shattered the Canadian mark of Alex Oakley by 13 minutes. Performing for Canada at the 1967 Pan-American Games in Winnipeg. Cappella attained silver and bronze medals against the best in the world. In 1968 the townspeople of Midland held a “Felix to Mexico” fund-raising drive to send him to the Mexico City Summer Olympics. But at the Olympics, Mexico City’s 7,525-foot altitude retarded Cappella’s performance. He finished 19th in the 50 kilometre race. But he bounced back. At the1969 Summer Games in Halifax, he won at 20 kilometres and he continued to win at several international meets in Norway, Sweden, Great Britain and his native Italy. He placed sixth for Canada at the 1970 British Empire Games in Edinburgh, Scotland. Into the early 1970s – and advancing into his forties – the Midlander reigned as Canadian champion in at least one of the race-walking disciplines. Canada’s finest race-walker was the oldest athlete of the Canadian team at the Pan American Games in Cali, Columbia in 1971. In 1972, at the Canadian Olympic Trials at York University, Cappella. leading for the first 21 miles of the 32-mile race, pulled a hamstring. Shortly thereafter, at 42 years of age and with nothing to prove, he ended his career as a competitive race-walker. Today, at 66, Cappella is retired and lives in Midland. He walks for fun and recreation now – at his own pace. 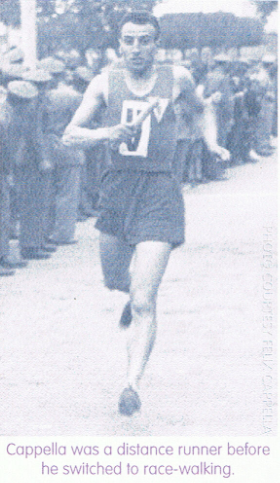