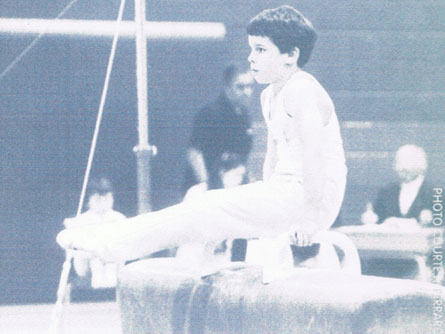 Loris Ferraro’s gymnastics career peaked when he won gold at the 1985 Canadian – National Gymnastics Championships in Victoria, B.C. as a member of the winning Ontario team. It was the culmination of nine years of competition. Ferraro was six years old when his talent first gained him recognition in competitions in the Midland Public Schools Gymnastics Program. Ferraro was still in kindergarten when he started playing with the gymnastics equipment at his school. By 1977, the Regent Public School student was consistently winning local elementary school contests. In 1980. he won the junior boys division at the Area 3 meet, placing first in four events. He joined the Hurons Gymnastic Club, which in 1981 hired Jerry Kasper as its coach. Kasper was an international judge and a gymnast for Canada. He would influence the rest of Ferraro’s sports career. Under Kasper’s guidance, Ferraro won first place overall in an Ontario Gymnastics Federation regional level meet. He placed first four times and finished second twice in the cadet division in the Ontario Gymnastics Federation tournament in March 1981. Within two years, the Midland gymnast was fourth in Ontario. An omission on the high bar perhaps cost him the 1983 Provincial championship in Toronto, but his composite score of 54.45 was still outstanding: he won the rings and floor routines, finished second in the camal horse and added a fourth place in parallel bars and high bar. A 12-year-old Ferraro took his first step towards the national championships at London. Ontario. There, he finished second in the floor exercise and vault, third on the parallel bars and high bars, and fifth on the rings. The results advanced him to third place in that provincial compulsory meet. At 13, he competed for the first time on a national level at Montreal’s St. Leonard District High School. During the national age-group competition. Ferraro placed in the top 15 in a field of 34 competitors. but by the time he competed in Victoria in 1985, he was the overall second-place finisher at a national qualifying meet. Ferraro retired from the sport in 1986. He now works as a level-one paramedic at the Orillia-Haliburton Ambulance Service in Orillia. He still lives in Midland.