First they were the Parksides, and then they were the Merchants, but it was when they changed their names to the Monarchs that Midland’s women’s softball team won the Ontario championship. In 1948, as the Parksides, they won the Barrie and District league crown. A year later, as the Merchants, they were the Copaco Trophy winners for the Simcoe County women’s district. Then, in 1951, as the Midland Monarchs, they crushed the host New Toronto Campbell Soups, 10 to 3, and captured the Provincial Women’s Softball Union Intermediate ‘B’ title. The Monarchs won the best-of-three final series, two games to none. Earlier, in Midland, the team had defeated New Toronto, 9 to 2. The provincial title was the third championship for the Monarchs that season. Midland also won the Copaco Trophy, and were the winners of the Barrie and District Ladies softball league. The Monarchs of 1951 were a powerhouse squad, with a team batting average of .290. Four Monarchs hit .300: Fran Brodeur’s .383 lead the club. She was followed by Pat Beteau at .369, then Doreen Wilson at .344, and June Hansford at .314. Midland routinely defeated foes from much larger centres by big scores. For instance, it once defeated Valley Taxi of Barrie, 13-0. Beteau was the catcher and a power hitter. She and pitcher Muriel Lamb comprised the most commanding women’s softball battery in Simcoe County. But each Monarch contributed to the championship season. They played as an unit, filling in for each other. excelling at several positions. Members of the 1951 Monarchs were Fran Brodeur, Doreen Wilson. Pat Beteau. June Hansford, Audrey Scott. Muriel Lamb. Ella McCallum, Ruth Rutherford. Melva Murphy. Helen Carroll, Joy Mosley. Doris Adams, Jean Swales, Margaret Watson, and Joyce Rutherford. The coach was Paul Quilty, the manager Jack Currie. Club president was R. E. Simpson. The next year. the Monarchs repeated as PWSU champions when Midland defeated Newmarket Dixons. Most of the women of the Monarchs held jobs outside the sport. Several worked during the day, and then played softball in the evenings and on weekends. Many were raising children as well. Sadly, Muriel Lamb. Pat Beteau, Doreen Wilson and R.E. Simpson have died since the club disbanded in 1953. But for five years. especially in 1951, the Monarchs played the best women’s softball in Simcoe County and in Ontario. 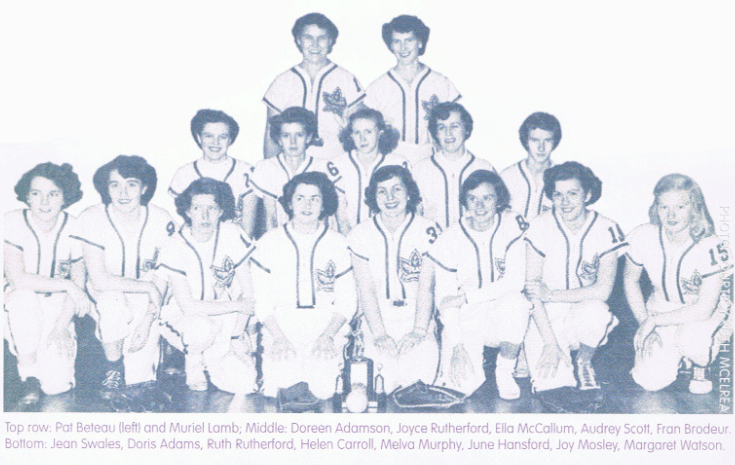 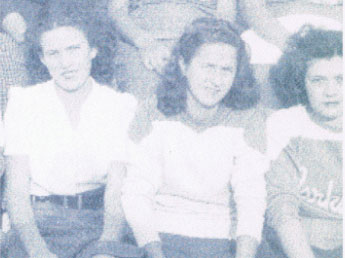