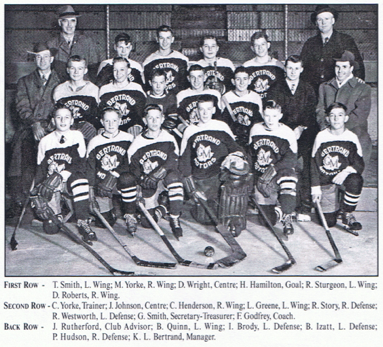 To say the success of the Bertrand Motors Generals was unexpected is an understatement, at least according to press reports of the day. The local paper called their victory “sleight of hand” and “puck magic.”

The Midland Arena Gardens was packed that Saturday night in April 1947 as a bunch of local boys, aged 14 and under, took on the heavily favoured Port Colbome Lions for the Ontario Hockey Association’s Bantam B Championship.
Not only were the visitors favoured, but they started the second game of the two-game, total-point series with a four-goal advantage that they had amassed in their first game, an 8-4 decision at home.

Astoundingly, that deficit was erased by the end of the first period in front of more than 500 cheering supporters, on two goals each by Henderson and Quinn.

By the end of the next period, the battling Bantams had doubled that tally, on markers by Johnston and Hudson and two more by Henderson.

In the final period, the so-called “pee-wee line” of Murray Yorke, Wright and Sturgeon took over. Along with Hudson and Quinn, they totalled another four goals before goalie Hugh Hamilton allowed the first and only Port Colborne goal with less than five minutes to go in the game.

As a result, the Generals won the championship by a total score of 16-9.