From the age of 14 to 16, Bill Beauchamp rocketed from the Junior “C” Penetang Hurons to the Midland Flyers Junior “B” team to the Major Junior “A” London Knights. His rapid rise didn’t surprise anyone who knew him and recognized his rare combination of heart and ability.

While the ability was never questioned, his heart was tested when he suffered a severe knee injury in his third year with the Knights. Beauchamp came to the Knights in the 1973 midget draft as a high-scoring, fast-skating forward who also was recruited by Princeton University. During his time in London, he played with future stars such as Rob Ramage, Brad Marsh, Dennis Maruk, Pat Riggin and Rick Green. Another highlight of his all-too-brief career was the chance to play against the Russians while with the Knights.

After scoringscoring 25 goals and 27 assists in 70 games for the Knights in 1974-75, Beauchamp was seen as a sure-fire future NHL draft pick going into the 1975-76 season, but a freak accident during a practice on the second day of training camp meant six weeks in a cast. Although he went on to register 12 goals and 24 assists in 40 games that season, the injury scared off NHL teams.

The sole exception was the Pittsburgh Penguins, who invited Beauchamp to their training camp where he had the opportunity to play in an exhibition game against the Washington Capitals. When that didn’t pan out, he attempt-ed to mount a comeback by playing in the NHL with Dayton and Columbus but it wasn’t to be.

Tough breaks didn’t deter him, though. He came home to play Senior “A” hockey for a couple of years with Orillia and Barrie before devoting himself to being a proud hockey father to his son and coach with the Penetang rep team and the Orillia “AM” Predators. 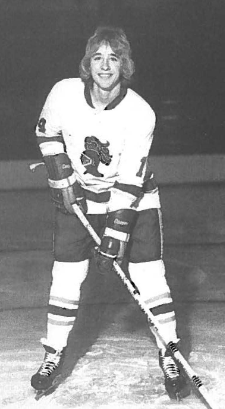