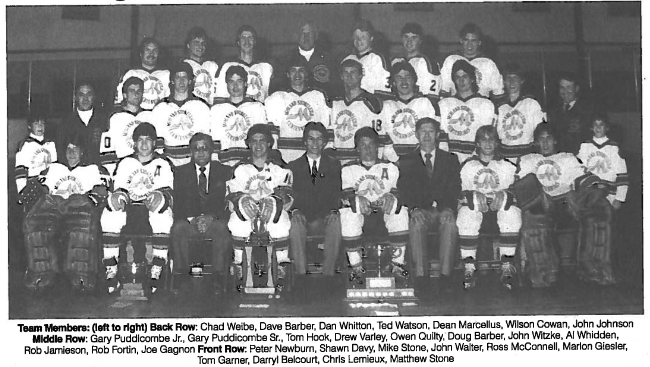 When a local newspaper named the sports team of the year for 1984-85, it said the choice was “pretty obvious.”

“The best team, that achieved the most prestige and carried the name of Midland to the furthest regions, was the Midland Stoneleigh Centennials…We salute Mike Stone, the owner of the Cents, for his diligence and interest which spread Midland throughout the Ontario hockey map, and coach Ross McConnell for guiding the Cents to the Finals.”

It was by no means a foregone conclusion at the start of the season, however. Entering their seventh season, the Junior C squad had never won much, and they were being guided by McConnell, who had moved to the team a couple of years previously after serving as president of the Elmvale Minor Hockey Association.

At 27, McConnell worked with former team owner Tom Garner, who was now the General Manager, to find the right personnel and that they did heading into the 1984- 85 season.

Despite finishing third in the Georgian Bay league regular season, the Centennials peaked just in time for the playoffs. They ousted Stayner Siskins in four straight games, outscoring them 44-19. Parry Sound Shamrocks fared slightly better, stretching the series to five games, but were outscored 39-32 in the series. The Cents’ momentum continued in the league Championship series, as they dumped Oro 77s in four straight, outscoring them 26-16.

Then it was off to the Ontario Hockey Association playoffs against Bradford Blues of the Mid-Ontario league where Midland was ambushed 9-3 in the series opener before winning the next four to move on to the Ontario semi-final against Bowmanville Eagles. In what the local paper called “one of Midland’s greatest sporting moments ever,” the Cents won the seventh game of the series 5-1 in Bowmanville after forcing the deciding game with a 3-2 double-over-time victory in Midland.

The Centennials’ dream to win the Ontario championship fell short in a five-game series against Belle River, but it had truly been a Hall of Fame season.