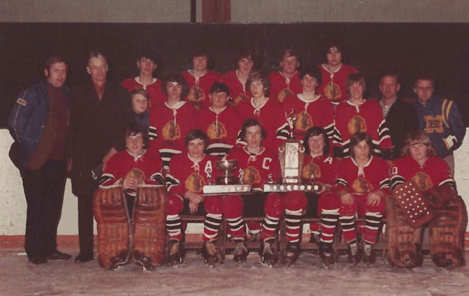 While winning the Ontario Little NHL Bantam “BB” championship may have been the highlight, the members of the 1971-1972 Midland Hawks Bantam Hockey Club had much to celebrate that season.

The provincial tournament in Cobourg started off on the right foot as Hawks’ captain Guy Ormiston scored both goals for a 2-0 victory over Grimsby. The second game, against Ottawa, was a nailbiter, as the two teams ended regulation time tied 2-2 behind goals by Ormiston and Richard Buttineau. But it was Dave Larmand’s overtime goal that made the difference.

In their third game, Jim Stelter scored twice and Bruce Guthrie once as the Hawks beat Bowmanville 3-1. With the win, Midland captured the Bantam “B” Division title and advanced to the grand championship Bantam “BB” game against Oak Ridges.

Once again, overtime was required as the teams were tied 3-3 after three periods. All three Midland goals were scored by Buttineau. It took only 19 seconds of extra time before Guthrie scored to give Midland the 4-3 win and the Ontario championship. Backstopping the Hawks was Joe Gibson who, according to the Midland Free Press, “looked after the netminding chore in excellent style.”

In addition to the provincial title, the Hawks also captured the Bantam “A” championship of the regional Silver Stick tournament held in Midland. They defeated Base Borden 3-0 in the final, with Ormiston, Buttineau and Larmand scoring the goals. Gibson was in goal for the shutout.

Later, the team travelled to Port Huron, Mich., to compete in the international Silver Stick tournament, facing teams from across North America. They reached the Bantam “A”championship game, but lost 4-0 to Levack, Ont., finishing as finalists..