He Turned a Little School into a Powerhouse

For Rick Pressé, the cornerstone for the St. Theresa’s Catholic High School volleyball tradition materialized from 1979 to 1982. In 1979 and 1980 Presse coached St. T’s senior boys Crusaders volleyball team to consecutive OFSAA ‘A’ championships. In 1981. His senior boys advanced to ‘AAA’ competition. and finished as Ontario semi-finalists. The next year, inspired by the successful groundwork Pressé laid, the Crusaders’ senior girls won the OFSAA ‘AAA’ volleyball bronze medal. Those victories would be the earliest realizations of Presse’s vision for the school. It gave St. Theresa’s what he wanted – a sports identity. Pressé built the Crusader program in 1976 – from an enrollment of less than 200 students – into a provincial volleyball powerhouse. Rick Pressé. (centre) surrounded by his victorious 1979 team For the next two decades, St. Theresa’s has medalled consistently at Ontario Federation of Schools Athletic Association competitions. Born on Sept. 5, 1949, Pressé was raised in North Cobalt, a mining town 160 kilometres north of North Bay. He quickly took up sports at Haileybury High School. where he played track and field, football, and his eventual favorite, volleyball. In 1973. fresh from a physical education degree at McMaster University. Pressé’s first job was teaching physical education and science at St. Theresa’s. His volleyball enthusiasm was assisted by Bruce Finlayson and principal Sister Marlene Kelly. The turning point came in 1976 when Pressé and Finlayson visited Toronto to watch a Japanese womens’ volleyball team. “They were not tall but they really excelled at defense, quickness and a quick attack. That’s what really got us excited about developing a volleyball program at St. T’s,” Pressé said in a recent interview. He soon molded the Crusaders into a championship squad. By 1977, the team was a contender at the provincial level. Under Pressé. the Crusaders were a team known for their crushing spikes, often delivered with devastating force by power-hitters Tim Trewin and Vince Deschamps. while other players with strong defensive skills, such as Brian Quesnelle kept the ball from touching down on St. T’s side. St. Theresa’s success inspired other local schools’ athletic departments. Soon Midland Secondary School and Penetanguishene Secondary School were learning the ropes from St. T’s program. and all the schools began introducing summer volleyball camps. He also has contributed in other ways to the town. Pressé founded the Georgian Bay Roadrunners track and field club and the Midland/Huronia Volleyball Club. As the latter organization’s president, he helped get beach volleyball courts installed at Little Lake Park. which attracted the first Canadian Volleyball Association Eastern Canadian amateur championships. 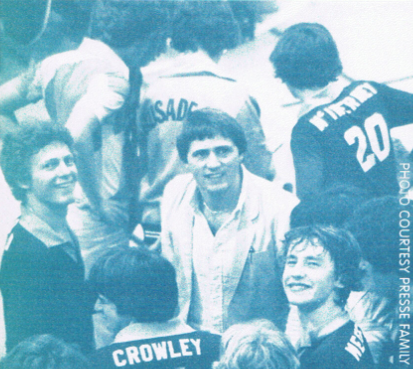