A celebrated hockey executive in Ontario during the Second World War. Jack Rutherford guided Midland to a provincial intermediate championship. In 1940-41, Rutherford was coach of Midland Intermediates when they defeated the St. Catharines Hayes Steel team, three games to one, to win the Ontario Hockey Association Intermediate A crown. It was the last time a Midland team captured the title, a feat that has not been repeated for 55 years. Among the players Rutherford coached that season were Dunc McConkey. Steve St. Amant. Morley White, Tommy Stewart. Jack Toole, Fawf Wilcox, Bev Scott, Elmer Arbour, Bunn Deschamps. Aub Grant, Jack “Cigar” Sager and Jimmy O’Hearn. He insisted that Midland remain through the War Years as an intermediate team and he kept it going inspite of wartime shortages of players, equipment and money. He continued to coach the intermediates until February, 1946, by which time he was that organization’s vice-president. The next year, Rutherford once again supported minor hockey in town. He was the senior coach of the Midland Bertrand Motors Generals Bantam team that won the 1946-47 Ontario Minor Hockey Association Bantam B championship. Rutherford served across Simcoe County in the 1950’s as long-time district OHA representative. including Intermediate A group convenor. In 1951. he was on the executive of the Midland Orphans when they won as OMHA Juvenile B champions. He also rebuilt lacrosse in Midland. In 1937, he was influential in returning box lacrosse to Midland for the first time in five years, while he continued as a director of the Georgian Bay Juvenile Lacrosse League from the 1930s to 1940s. For several years. Rutherford coached the Midland Chevrolets’ juvenile entry in the Georgian Bay league. Meanwhile, in 1939. Rutherford replaced former National Hockey League player Bert Corbeau as coach of Midland’s intermediate hockey team. During his near seven-year coaching tenure, he also assumed builder positions such as club president and manager. and represented Midland at OHA meetings. Born John William Rutherford in Midland, in 1897, he attended schools in Midland and Toronto. He married the late Elsie P. May in 1917. The couple would have three daughters: Ruth. Joyce. and June. who is now deceased. From 1949 to 1955. Rutherford operated a Texaco service station in Midland at the corner of Yonge and King streets. Earlier, he worked 18 years as an automotive mechanic for W. H. Keller. and was later employed in the town by Bertrand Bros. Motors and Bourgeois Motors. He retired in 1962. Those who knew him especially remember two things: he always wore a fedora hat: and he was always a gentleman. 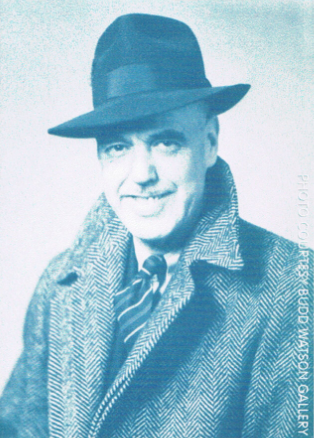