Peter Millar’s name appears on the Stanley Cup among those of Wayne Gretzky, Mark Messier and Grant Fuhr. The Midland native served as athletic therapist for the champion Edmonton Oilers during the National Hockey League team’s dynasty years of the 1980s. Four times – in 1984 and 1985, and in 1987 and 1988 – he shared the team’s Stanley Cup victories. As a sports medicine professional. Millar found success on the international scene, too. In 1984, he was the athletic therapist for the winning Team Canada entry in the Canada Cup. A former football and basketball athlete at Midland-Penetanguishene District High School, Millar played hockey in the Midland Little NHL. As a teenager he moved to Brampton, enrolling at Central Peel Secondary School where he performed on that school’s football squad. After high school, Millar began his sports career at Laurentian University in Sudbury. For two seasons, 1972 to 1973, he was trainer for the university’s hockey team and later earned a degree in Health and Physical Education. He then advanced his studies at Oakville’s Sheridan College. There he attended classes in the Sports Medicine program. While a student at Sheridan, Millar also worked with the Ontario Hockey League’s Bramalea Blues. Before joining the Edmonton Oilers of the then World Hockey Association in 1978. Millar spent five seasons at the semi-professional and minor-pro levels, including a three-year stint in the American Hockey League. In 1979, when the Oilers entered the NHL, Millar continued his role as athletic therapist. He held the position with the Oilers for the next 10 seasons. Millar remains in the NHL but is now the Los Angeles Kings’ equipment manager. He joined the Kings in 1989 and was a member of the training staff when Los Angeles reached the 1993 Stanley Cup finals. Peter Millar and his wife. Ramona. live in El Segundo, California. The couple is raising two children: a son. Matthew, 15, and a daughter, Ashley, 13. 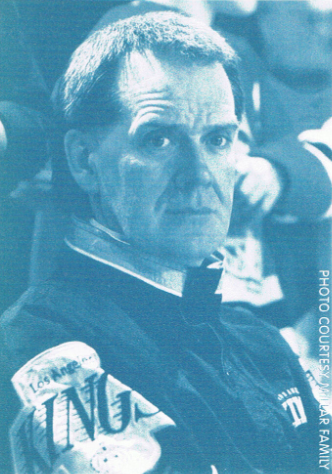