Not only has he performed to great levels of competitive sport as an athlete, bathe has returned home to share his love of the game with his children and students,” said Lynn Burgin in nominating Pat Brodeur for induction into the Midland Sports Hall of Fame.

She couldn’t be more accurate. From the lofty heights of Princeton University, where he captained the hockey team, to being the top goal scorer for a European professional team, Brodeur for years has generously shared his expertise with aspiring hockey players from tykes to the boys’ team at St. Theresa’s High School where he is a teacher.

Since lacing up skates for the first time at age four. Brodeur has immersed himself in hockey. He captained the Midland Junior Civitans Major Bantams to the Ontario championship in 1978. In 1980, he was named to the Silver Stick Midget A all-star team and received the Larry McGrath Memorial Scholarship. A year later, he made the league all-star team as a member of the Orillia Travelways Tier It Junior A team.

As a student at St. Theresa’s, Brodeur earned nine varsity letters in volleyball, basketball and track, and was selected to the all-Ontario volleyball and hockey teams in 1978.

Awarded a scholarship to Princeton University, he was honoured as the outstanding freshman in 1983, as well as being named the player who exemplified winning spirit in both 1984 and 1985. He was the Ivy League player of the week and on the honour roll four times in 1984 and 1985.

After leaving Princeton as the university’s all-time seventh-leading scorer, Brodeur played one season for a pro team in Germany, where he was the top scorer. He then returned to Midland to teach, coach and raise a family, having married his high-school sweetheart, Mary Beeney.

An indication of the kind of person he was – and is – can be seen in a letter he wrote to the Midland Minor Hockey Association as he left for Orillia as a teenager: “I would just like to say thanks to the many coaches, managers, executives of Midland Minor Hockey, and to all the people who drove to games and gave as support throughout the years. I especially thank my coaches who devoted many hours of their free time and money out of their own pockets.”

Little did he know then that he would be one of them, but it’s obvious he wouldn’t want it any other way. 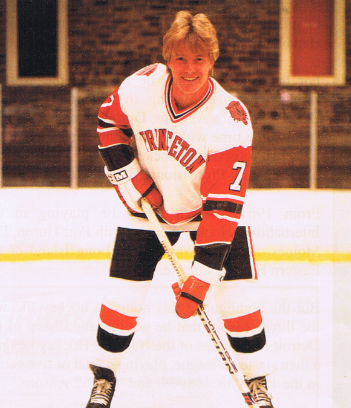