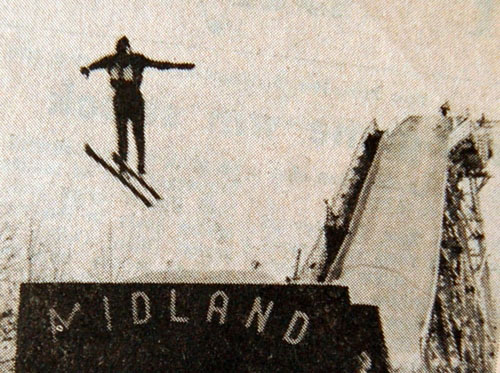 The Midland Ski Jump was located on the west side of the Kings Highway 27, now Simcoe County Road 93, and north of Balm Beach Road in the Township of Tiny and was built and opened in 1955. The idea was the genesis of noted ski jumper Pete Pettersen who convinced Bill Cranston and others in the community to ante up $15,000 for the land, site improvements and the wood structure.  A local contractor, Alfred Rei, erected the 110 foot edifice on the top of Midland’s mountain. It was built of spliced and treated 2inch by 10 inch planks. Additional monies were spent on building a suitable out run at the bottom of the hill.  It was reported that on a clear day the jump could be seen from the high point on Highway 27 a mile north of Elmvale, some 15 miles away.

The official opening was attended by Midland Ski Club Manager Pete Pettersen, Mr. Wm. A. Robinson Member of Parliament and Deputy Speaker of the House of Commons, Midland Mayor Charles Parker and Ross Larway a prominent Ontario Ski Zone Official. In the early years of operation it was home for local, provincial and dominion championship events. The site hosted the Canadian Nordic Championship in 1957. Some of the skiing demonstrations saw two jumpers side by side going down the jump. It was reported that for one of the spring events 8,400 fans attended, that highways were congested with the OPP controlling traffic

The longest jump of 187.0 feet was accomplished by Franz Elsigan of Buffalo, NY.  Pettersen was the master of promotion for the club and one year he arranged to fly in the Finnish Olympic Skier Kalevi Karkinen who gave a masterful demonstration of Finnish styled jumping to a large and appreciative crowd. In the intervening years many notable jumpers such as Jacques Charland, Don Haddow, Hans Eder, Gerald LaRoche, Gerry Gravelle, the father and son team of Mark and Reino Kaija and Burnie Clarke attended competitions. Jim Georgas who went on to be the National Ski Jumping Coach received his early training under Pettersen at the Midland jump.

The Midland Ski Club was represented in the early years by Louis Moser, Jack Gerow and Eric Kurrle. It was also the home of the annual Christmas vacation ski jumping school operated by Pete Pettersen where there were three jumps for beginner, advanced and expert classifications. Stories abound of many of the young people of that era spending their weekend afternoons at the ski jump perfecting their skills along with a few unmarshalled kamikaze jumps. With the untimely death of Pete Pettersen in 1965 the Midland Ski Club lost its major supporter and promoter and in 1967 the structure was demolished.