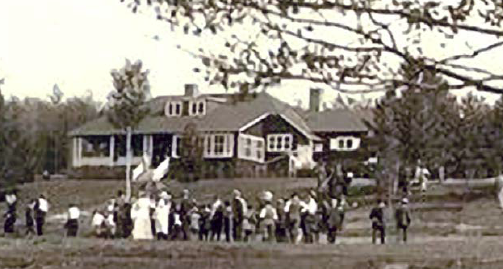 In 1917 Midland industrialist James Playfair bought three parcels of land in Tiny Township totalling 124 acres for the princely sum of $5,326.00 for the purpose of building a golf course. Nicol Thompson, the older brother of famous Canadian golf course architect Stanley Thompson was engaged to design the nine hole golf course that opened in 1919. The length was 2,900 yards and par was 36. The greens were sand, and round, with a permanent hole in or near centre. The clubhouse design included private rooms on the second floor which was common for the time period. Guests were initially charged $0.75 per night and the rooms were booked solidly for years.

The formal opening of the Club took placed on Saturday May 31, 1919. Mr. Playfair drove the first ball from number one tee and then a four ball match was played between the Amateur Champion of Canada, George S Lyon and his partner Lieutenant Wilfred James of Toronto’s Lambton Club against B.L. Anderson , the Honourable Secretary of the Royal Canadian Golf Association and Seymour Lyon.

In 1922 ownership of the Club was transferred from Mr. Playfair to the Midland Golf and Country Club Limited. Mr. Playfair was President. Alexander W. Bell was the Secretary of the Club from the beginning until his death in 1935 and credit for much of the early success of the Club must go to him. His great great grandsons Stephen and Owen Bell are fifth generation members of the Club.

The Club barely survived the Great Depression and the war years also presented many challenges. But in the early sixties talk began in earnest to build a second nine. Midland dentist Dr. Ross Parrott, who had a degree in civil engineering, took charge of the project. Fifty acres abutting the southern boundary of the Club were acquired for $40,000. Dr. Parrott’s draft plan was reviewed, modified and then finally constructed in 1966 and 1967 at a cost of $70,000. In 1968 a monument was erected at the tenth tee noting ”This back nine is dedicated to the late Dr. J. Ross Parrott in his memory for his untiring efforts in its planning and engineering”.

In 1974 construction began to renovate and add to the Clubhouse. After much debate a liquor licence was obtained in 1973 and the secreted liquor bottles slowly disappeared from the private lockers.

The Midland Golf and Country Club has stood the test of time. For nearly 100 years it has been a sporting landmark. From earnest competitions to friendly games focused on either family time or fellowship, the Club has provided a venue for many years of recreation and relaxation in a beautiful and tranquil setting.