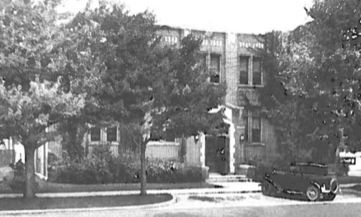 Although the Midland branch of the YMCA (then known as the Young Men’s Christian Association) was established in 1900, its members moved from location to location without much direction or growth for almost 20 years until local industrialist D.L White got involved.

White recognized the need for a permanent athletic and social venue for Midland and the surrounding area. That need was made clear in 1923 when a YMCA-sponsored father-and-son banquet drew  500 attendees and other activities were becoming equally as popular.

That same year, a group of local businessmen bought property on Hugel Avenue. Their ambition was to raze the two decrepit homes and build a fully appointed YMCA. That ambition was aided by White who said he would donate $50,000 to the cause if the community would contribute a like amount. A building campaign in1928, spearheaded by Win Smith, raised the required funding and construction began. Smith would serve as the Y’s secretary from 1923 to 1965 and his influence on the healthy development of the youth of Midland cannot be overstated.

On Feb. 5, 1929, YMCA president Ed Letherby chaired the official opening, unveiling a portrait of White. The stately red-brick edifice provided a fully equipped gymnasium, locker rooms, meeting and social space, games rooms, reading area, and gymnastic and weight-lifting equipment. If the walls of the YMCA could talk about the 50 years of activities that were held within its walls, they would speak of spirited athletics, of lively dances, of quiet get togethers, and, most importantly, of friendships forged and characters built.

This building, in many ways, was a vital part of the glue that held this community together. “The YMCA was the focal point for many youth growing up in our community,” said Chester Graham, who nominated the historic venue to the Sports Hall of Fame and spent many memorable hours in the building during his formative years. “Many children got their first glimpse of athletic and social activities through the YMCA. It was also a gathering spot for children regard-less of their background, religion, social or economic status. We were always welcomed and encouraged to drop by at any time, to participate, meet others or just hang out.

“The YMCA, through the many staff who worked there, strongly influenced the development, attitude and growth of many individuals who now are or have been leaders in our community.” When the new YMCA overlooking Little Lake was opened in 1979, it welcomed more than 700 card-carrying members, a testament to D.L. White and the other forward-thinking, civic-minded founders of the Midland YMCA.