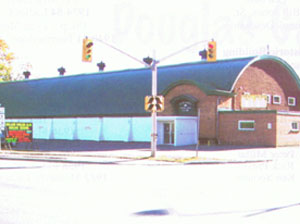 On March 15, 1919, 51 men requested a meeting with Midland Town Council and the Agricultural Society regarding the construction of a building to accommodate curling on the present site of the Midland Curling Club. The plans for the building were considered satisfactory and the outlook for the necessary funds to carry the work to completion promised to be good. Thirty men loaned money and backed a bank loan for the remainder of the funds.

Plans were drawn up by the architect, Wilfred F. Smith, and the construction was done by Cummings Brothers beginning in the fall of 1919. One still-active member of the Club can remember William and Isaac Cummings describing how they laid the wooden arches out on the floor area and then pulled them up into place using horses.

Natural ice was used until February 20, 1933, when the Curling Club signed an agreement with the Arena Gardens (now the site of the North Simcoe Recreation Centre) to supply artificial ice to the curling building. According to the book, Midland and Her Pioneers, written by G.R. Osborne, “there were 13 miles of pipe on the floor surface of the Arena Gardens and the Curling Rink – the two buildings served being the second-largest ice surface in the world refrigerated by one plant, having a total ice surface of some 24,000 square feet. At this time, Midland was the only town between Toronto and Winnipeg that had artificial ice for skating, hockey and curling.” To this day, the pipes still run underground between the two buildings.

The Club experienced financial difficulties during the Second World War and the Parks Commission took control of the building under the Town of Midland. In 1950, the Club requested the Town to exchange the present building for a new one, but this did not happen. In 1958, the Club requested permission to build an addition onto the existing club ~om. Upon receiving this request, ‘town Council and the Midland Park Commission offered the building to the Club for $8,100. This offer was accepted, the building once again came under the ownership of the Midland Curling Club, and the addition was made to the club room.

There hasn’t been much change to the building since then, except in 1977 when the Ministry of Labour required that additional beams be installed to support the roof. In 1995, a new steel roof was installed to conform with the architecture of the building.

The Midland Curling Club is a worthy addition itself to the Midland Sports Hall of Fame, having seen many local, national and even world champion curlers learn their skill and perform to the highest level under its roof since 1919.