FAMED RINK DESTROYED BY FIRE IN 1976 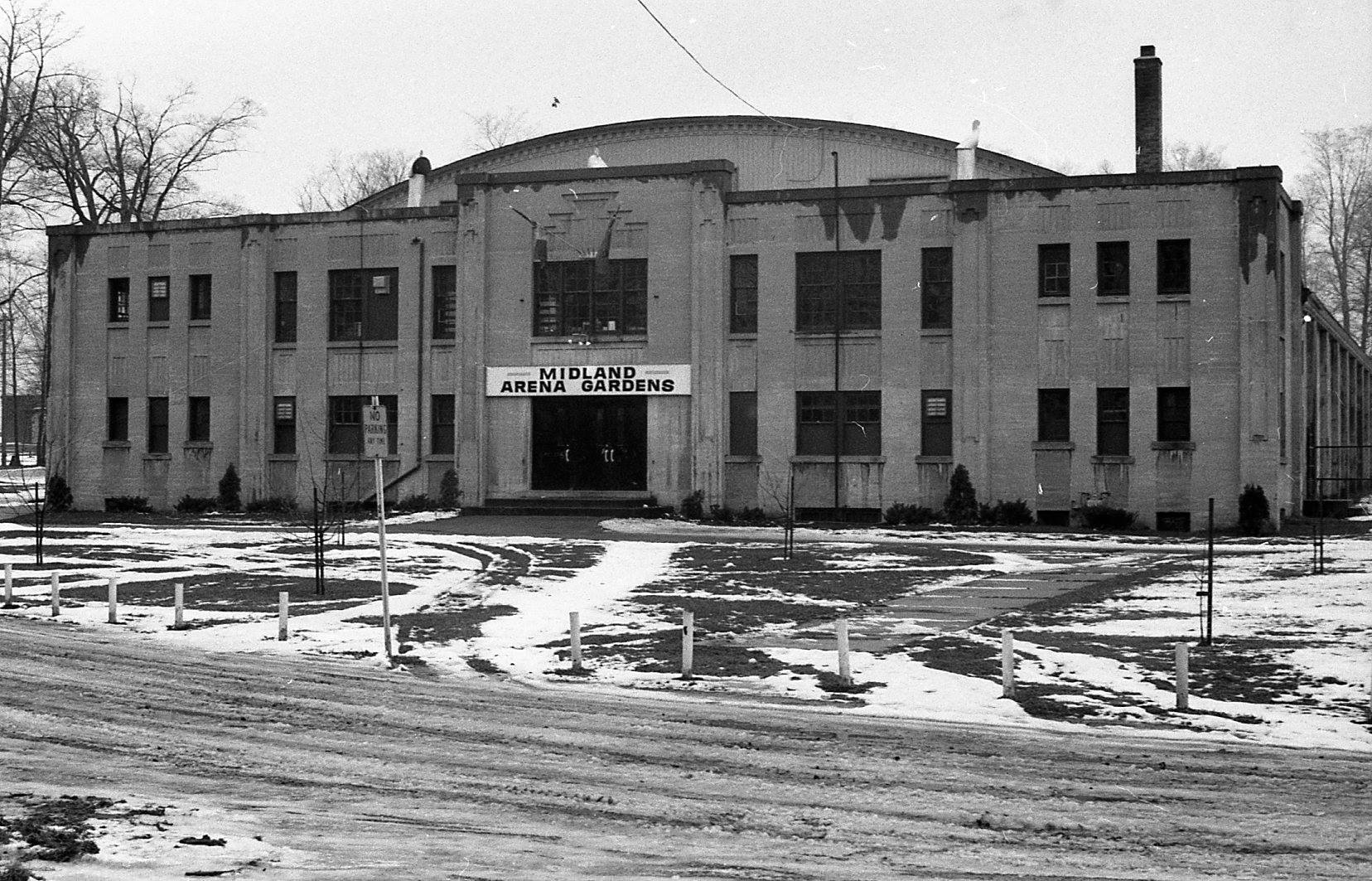 Toronto has Maple Leaf Gardens. New York City has Madison Square Gardens. Houston has the  – A Astrodome. Montreal had the Forum. And Midland had the fabulous Arena Gardens. The first ice rink in Midland was purportedly built in 1885 on the corner of Dominion and Second Street, where the current Wendat offices are located. A rink was also supposedly built on the corner of King Street and Hugel Avenue in 1879, but very little is known of this.

In 1887, William Chew built a rink on Midland Avenue, and it served the community as a home for hockey games, roller skating, dancing and meetings until being destroyed by fire in 1926. At that time, the drive began to get a new arena built in town. By the fall of 1931, that dream became a reality when construction was completed on the Midland Arena Gardens on the present site of the Centennial Arena.

The building was a reinforced concrete structure 104 by 231 feet with a patented reinforced roof that did away with interior pillars. The design allowed an unobstructed view of the ice surface from any section of the building. In 1932, an artificial ice surface was installed in the Arena Gardens by J. H. Lock and Sons Ltd. of Toronto and Montreal. This gave Midland the only artificial ice arena between Toronto and Winnipeg. Artificial ice was installed at both the Arena Gardens and the nearby curling club at the same time. It took 13 miles of pipe laid under the floors of the two buildings, 17 tons of calcium chloride for the brine solution, nine tons of cork insulation, and 1500 pounds of liquid ammonia to make the system work.

A number of improvements were made to the year-old building by 1933. These included opera chairs in the reserved seating area, steam heating for the comfort of the patrons, an electric time clock and a Baldwin sound system to supply music for skating. On January 6, 1933 the grand opening of the beautiful new arena was held and attended by many of Ontario’s top dignitaries.

These included Midland Mayor J. B. Roebuck, The Hon. Wm. Finlayson, MPP and Minister of Lands and Forests, The Hon. W R Price, Attorney General of Ontario, WA. Hewitt, secretary of the Ontario Hockey Association, Midland’s own George Dudley and J. Percy Bond, President of the OHA. Those attending the gala evening were treated to displays of figure skating and an exciting hockey game between a team from Newmarket and the Toronto Marlboro Juniors.

The original 21-year lease was presented to Arena Gardens (Midland) Ltd., a group of 100 or so investors who operated the rink. George Ross was President of the company and accepted the lease on their behalf Between that night and the fateful night in July of 1976 when the Arena Gardens was destroyed completely by fire, the Arena Gardens was the home of great Midland sports history and memories. Stars of hockey like Roy and Charlie Conacher, Bobby Orr, Mike Robitaille and Wayne King all displayed their skills on the Arena Gardens ice. So too, did skaters Donald Jackson and Brian Orser.

It was also the scene of spectacles like barnstorming wrestling shows featuring the likes of Whipper Billy Watson and musical extravaganzas featuring stars like Hank Snow, Canada’s Singing Mountie. When fire destroyed the structure in 1976, future Hall of Fame Mike Robitaille described the feelings evoked by the passage of this magnificent piece of Midland’s history. After watching the blaze destroy so much hockey and sporting history he was interviewed by the Midland Free Press and was quoted as saying, “I was just sick. It was like I was watching a piece of my soul go up in smoke.” 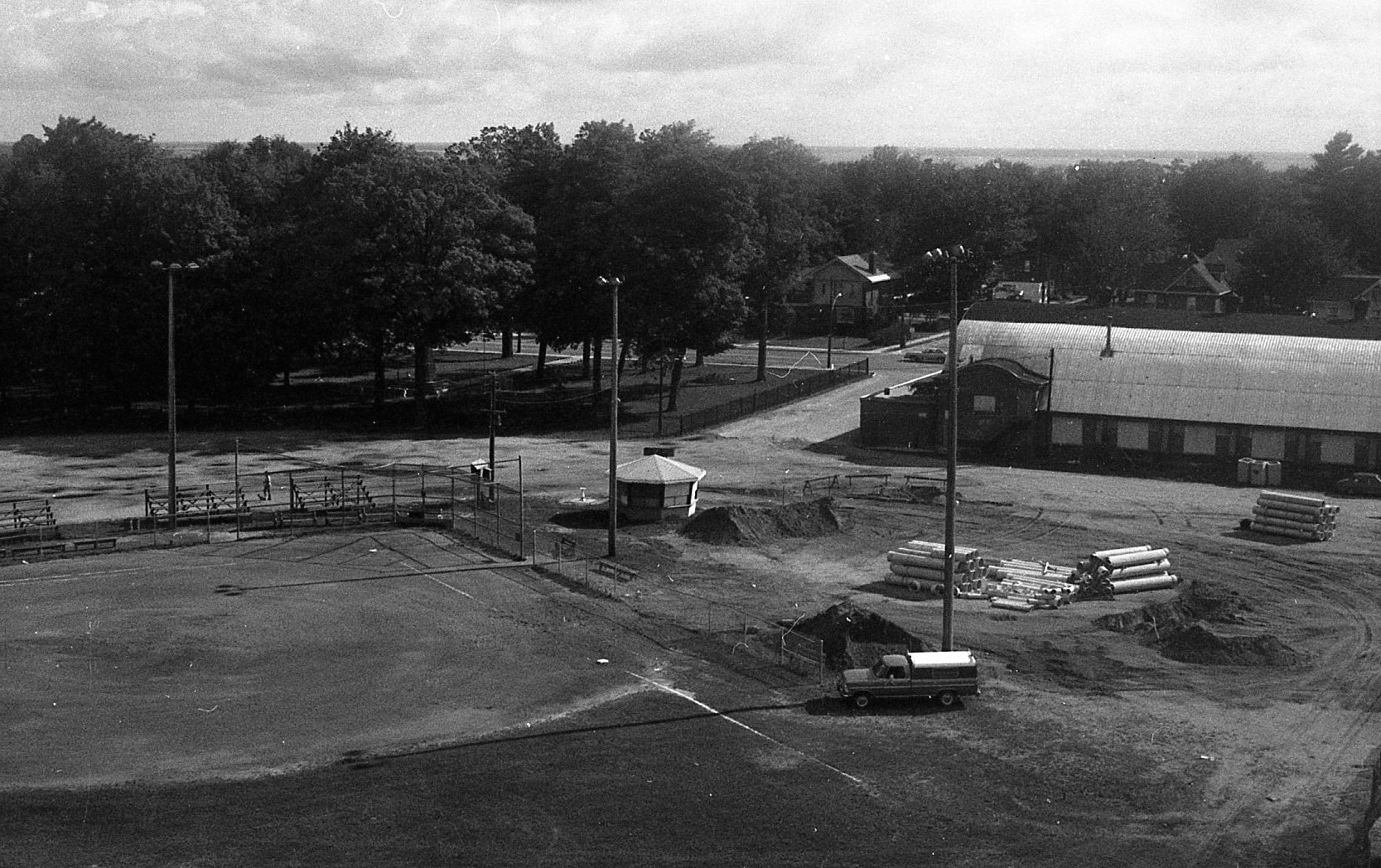