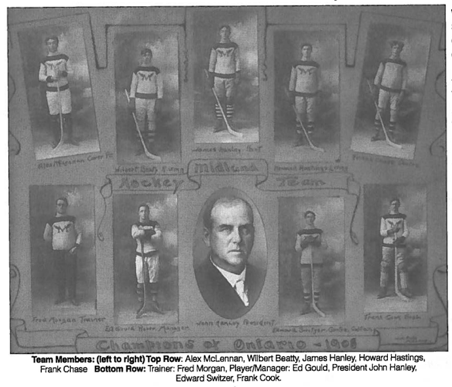 If anyone doubts our town’s sporting heritage, let them read about the exploits of the Midland Intermediate Hockey Club-exactly a century ago! They were the first Midland team to win an Ontario Hockey Association title, although a local team had claimed the Northern Ontario crown in 1900. All this, despite the fact that ice hockey was recognized as a game only a couple SPORTS HA of decades previously.

In 1907, a team of local athletes donned jerseys adorned with a flying “M” which they proudly wore to proclaim that they were from Midland. A couple of years earlier, the men entered a senior team in the OHA without much luck, a local newspaper reported. However, “reverting back to the intermediate ranks for the season of 1907-08, their efforts were crowned with success as they captured the division championship.”

It was a hard-fought title, though. They were up against Collingwood, which had finished as divisional runner-up the previous year. The first game of the two-game, total-point final series was played in Collingwood, where the home team trounced Midland 12-8. It was Midland’s first defeat of the season. But Midland bounced back with an 8-4 victory in its rink, tying the total points at 16 each, and necessitating a deciding game. This took place on neutral ice in Orillia, where Midland prevailed 8-5 and Coiling-wood was a bridesmaid yet again.

In the end, though, Collingwood would have the last laugh as they raided Midland’s roster after the season, taking several players from the champion-ship roster. One of the most prominent, goaltender Frank Cook, was inducted into the Collingwood Sports Hall of Fame. W.A. Hewitt, father of famed broadcaster Foster Hewitt and a fellow member of the Hockey Hall of Fame, called Cook “the greatest  goalkeeper of all time.” They may have gotten the players, but Midland had the title for all time, as we can boast a century later. We are proud to have Frank Chase’s 1908 Championship watch on display in the Hall of Fame.