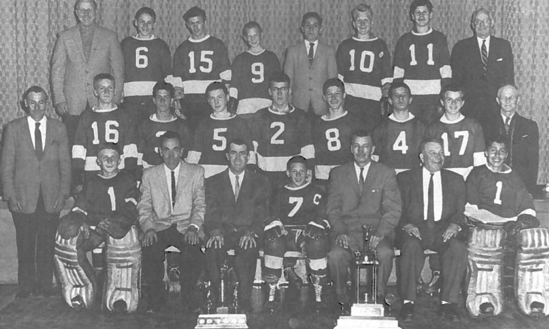 1961-1962 was a season to remember. As the Beach Boys were surfing across North America, the Midland Bantams Red Wings were skating their way towards an All-Ontario Championship hockey title.

It was a season during which Midland sidelined every team in sight en route to winning the 1962 Ontario Minor Hockey Association Championship.

After an intense season, the team battled through five rounds of playoff action, disposing of teams from Collingwood, Orillia, Aurora, Burlington and finally meeting Leamington in the provincial final. In what was a hard-fought series, Midland won the best of five series – three games to two.

The team was led by the talent of Mike Robitaille, Earl Scott and Bob Larmand, all of whom went on to celebrated hockey careers. Robitaille played with the Kitchener Rangers, later moving on to a career in the National Hockey League with Vancouver, Buffalo and Detroit.

Larmand played for the Niagara Falls Flyers under the legendary ‘Hap’ Emms and many years of senior
hockey thereafter. Scott played professional hockey in South Africa and, upon his return, he, Larmond and Keith Bath played senior hockey for the Midland Flyers. Clayton and Cousineau played university hockey for Queen’s and Guelph respectively.

In the championship final, Robitaille ended up lining up against Leamington’s Randy Manery, a player who would also go on to play in the NHL and ironically, they would end up being teammates in Detroit during the 1970-1971 season.