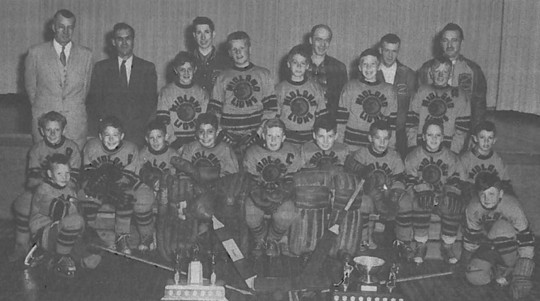 It was front-page news in Midland on April 8, 1959, and for good reason. For the fourth time in seven years, a hometown Little NHL team had claimed a Provincial title. This time the heroics took place in Welland, Ontario, where Midland won the Little AHL division by sweeping all three games.

In their opener, Midland edged Huntsville 2-1 on a last-minute goal by Jon Pettersen after Dennis Abbott scored the opening tally, and then crushed Trenton 7-0 in the semi-final, with Chester Graham scoring twice and Mike Robitaille adding three goals and an assist. Those victories led to the showdown against the local Welland-Crowland squad, who were favoured to win the title.

“For the first 10 minutes of the game, it looked like they might run Midland out of the rink,” said a local sportswriter, “but some great netminding by Wayne Holden kept the Midland youngsters in the game until they finally got rolling.” A goal by Graham staked Midland to a 1-0 lead and, after their opponents tied the game, Ken Edgar put the visitors ahead again, 2-1 at the end of the first period.

Robitaille assisted on both goals. Robitaille and Bob Clayton set up Pettersen in the second period for the go-ahead goal, and Pettersen sealed the 4-2 victory with his second of the game on a pass from John Sutton. A large contingent of family and friends made the trip to cheer the youngsters to victory, completing what is now believed to be an undefeated season.

Aside from the front-page headlines and stories, the boys returned home to a true heroes’ welcome complete with the traditional ride on a fire truck down King Street.