The Midland Intermediate hockey team of 1940- 41 were known as the British Consols, the Greenshirts or as the Midland Intermediates during the Ontario Hockey Association season. When the season was completed, they were simply called the champs. Midland enjoyed a highly successful regular season, losing just one game to Gravenhurst. They had showed some fine defense and an explosive offense. That offensive power would pay off in the ultimate dividend before they were through. Pat Kelly, the lone surviving member of the 40-41 Midland Intermediates, recalled recently that “we were sound defensively, but had our scoring moments also.” Kelly x’as the backup goalie for Midland. The first opponent for Midland was the Gravenhurst team for the league championship. It was a best-of-three series which the Greenshirts won 2-1. The first game was a convincing 5-2 win as Jack Toole netted a hat trick. Game two went to Gravenhurst by a 5-3 score. The third game was won by Midland at home by a 4-3 score. The highlight of the game was Bev Scott’s goal. He flipped a long shot, from just outside his own blueline and it caught the Gravenhurst netminder napping. That win put Midland against Campbellford in a two-game total-goals series. Midland easily handled Campbellford 12- 6 and 7-4. Crawford “Fawf” Wilcox scored a pair of goals in the first game and had two more in the second one, along with Aub Grant. That set up the OHA championship series against St. Catherines in a best-of-five format. Game one ended in Midland’s only shutout of the season, a narrow 2-0 victory. Toole was again a star, scoring once and setting up the other goal. Morley White recorded the shutout. Bernard “Bunn” Deschamps had his nose broken in the second period but returned to the lineup in the third. St. Catherines rebounded in game two with a 6-3 win on their home ice. Toole netted a pair and Deschamps one in a losing cause. The last two games saw Midland flex thcir offensive muscles to claim the championship. The British Consols won game three 12-5 as Aub Grant and Jimmy O’Heam had hat tricks and Deschamps and Bev Scott had two goals each. O’Hearn also had three assists. Game four appeared to be going to St. Kitts as they scored twice in the second to lead it 2- 0 until Midland’s offense kicked in again. Five unanswered goals in the third period resulted in Midland’s championship victory White’s goaltending was called “scintillating” by the press. O’Hearn with two, Scott, Wilcox and Tommy Stewart handled the scoring. Pat Kelly remembered that “we were quite proud of the championship.” The win by Midland was .special in that they were almost exclusively made up of players born and raised in the Midland-Penetang area. Goalie White was from Port Severn and had spent some time, along with Bunn Deschamps, playing pro hockey in Florida with the Miami Pirates. Be’ Scott. Aub Grant, Tommy Stewart, Steve St. Amand, Elmer Arbour, Jack Toole, Fawf Wilcox, Dune McConkey, Jitil O’Hearn, Pat Kelly, Deschamps and Jack Sager were all from Midland or Penetanguishene. The team was coached by Jack Rutherford. The Midland Intermediates of 1940-41 were the first Midland team to win an OHA championship since 1908 and they remain the last intermediate entry from the town to achieve the honour. 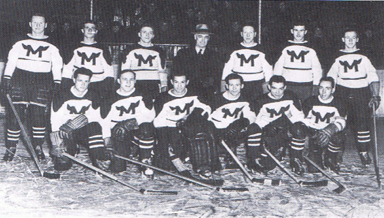