They claimed to be curling just for fun, but for several years the Lynn Morton curling rink was among the best women’s curling teams in Ontario. Despite their claim to be out for fun, skip Lynn Morton and her rink of Vivian Shaw, Marg Bourgeois and Diane Vollick could flat-out curl with the best of them. “We enjoyed the game though, we really didn’t think about how good we were,” recalled skip Lynn Morton. “Other teams would be out there timing rocks and checking the ice. We just had a good time and played the game. We really had no idea of the technical aspects of the game. We just did things instinctively.” Their list of wins included the Southern Ontario Ladies Curling Association doublerink championship in 1977. They won the SOLCA district championship five times, and went to the SOLCA provincials four times. They also won so many bonspicls both locally and around the province, that it’s hard to count them. However, the season of 1980-81 stands out as their best one. That year the team won their way through the SOLCA playdowns. First the district, then the divisionals, then the Southern Ontario title. That put them in the Ontario championships, not yet called the Scott Tournament of Hearts. It was probably one specific game at the SOLCA finals in Kitchener that unified and typified the team. “We were down 9-1 after five ends against Ingersoll and managed to come back and win it 11-9,” remembered Lynn Morton recently. “The local media described it_ very well after the game. They said it looked like we were there to provide the comedy, until we made the big comeback. That game really spurred us on to play better and go on to win.” They won the Southern Ontario title in a tie-breaker against Sarnia and that put them in the Ontario championships in Thunder Bay. It was the highlight of their careers. In 1982, they tasted their toughest heartbreak. At the SOLCA finals in St. Catherines, they lost the final on a measurement that would have sent them to the provincial championships for the second year in a row. “We finished in a four-way tie for the lead after round-robin play and that set up a playoff against Guelph. We lost that by the measurement and that was tough to take. We wanted to go back to the provincials,” said Morton. The team won one more SOLCA district and divisional championship in 1984, sending them to the Southern Ontario finals at Richmond Hill. They finished fourth that year and decided to call it a career for the team. “We retired as a team after that season,” said Lynn Morton. “Diane had family obligations and was going to be spending winters in Florida. We always juggled family lives and personal schedules with the team obligations. It just got to he too much.” Morton believes that it was the team’s all-round skills and their fun approach to the game that made them so successful. “All of us could make a hit or a draw whenever we needed one it seemed,” she said. “The team never really practiced or timed shots. We just had a great feel for the ice. We jelled as a team on and off the ice. We had great fun and won some great games. We always got along and respected each other’s thoughts and ideas. Decisions on shots were always made as a team.” It always seemed that those decisions were the right ones for this championship curling team. 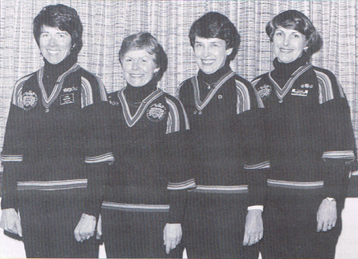