Every person who passes through the lobby of the Midland arena has noticed the quaint souvenirs from Sweden in the display case. Everyone who has sat in the stands recalls a banner commemorating the year when a local team won the famous International Silver Stick Tournament. Those mementoes are the legacy of one and the same team… the Midland Branch 80 Legion Major Midgets. The very first minor hockey team to travel overseas to represent the town of Midland, the Legionaires dominated Georgian Bay Midget “A” hockey 10 1976 with a 10-2- 3 record. What is even more remarkable is they did it without benefit of home ice. The Midland Arena Gardens had been destroyed by fire in the summer of 1976. Although they did not fare too well in the Aspen Cup in Sweden that winter, they returned to win the Silver Stick in Sarnia. But their gentlemanly behaviour on and off the ice in Sweden led to teams from that country visiting Midland for exhibition games for years to come. ​Team members included Paul Goocline, Dwayne Story, Mike Abram, Steve Dunn, Craig Watson, Martin Veall, Bill Griffin, Ken LaGrandeur, Steve Thomson, Kevin Denis, Fred Wallace, Andy Zurawski, Kelly Larmand, Mike Gouett, Robert Floats, John Reid, Lonnie Brett, Kim Lavigne, and Andy Seeman. The Legionaires were coached by Bob Merkley and managed by John Arn-istrong. Pete Abram was the trainer and Dick Story served as the Assistant Manager. 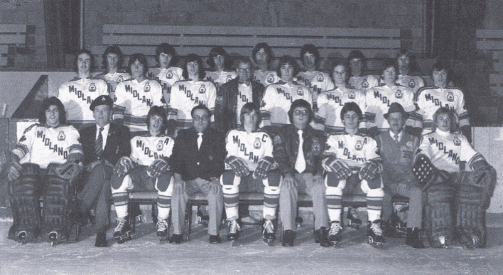