Luke Dubbin was raised in Midland and became a stand out, multi‐sport athlete. Although he didn’t start playing competitive hockey until the age of seven, he excelled in that sport to the point that his hockey accomplishments overshadowed his volleyball and track and field athletic endeavors.

He attended Huron Park Elementary School where, for the first and only time in the school’s history, to recognize Luke’s contributions to athletics, they retired his jersey. At St. Theresa’s High School where he attended grades 9 and 10 only, he quickly earned the nickname “The Franchise” because he became the dominant athlete on every team that he played on. The school’s volleyball team was the Georgian Bay Champions in 2001 and Luke was voted the MVP of that team and was also voted Junior Athlete of the Year in both 2000 and 2001. The St. Theresa’s School hockey team, the Thunder, won the Georgian Bay Championship in 2001 and Luke was the MVP on that squad. Luke also won multiple Gold Medals in
track and field, and holds school records for both individual and team in the Midget and Junior Boys Sprint and Long Hurdles events. While still in Midland, Luke played in the Midland Minor Hockey system winning the Atom OMHA Championship in 1996‐97 and the Peewee OMHA Championship in 1998‐99. He was a dominant player and team captain on both of those squads. At 16 he moved to Orillia to play Junior Hockey for a Rama based team and the remainder of his secondary schooling was completed at the Patrick Fogarty Catholic High School. It was at this time that Luke was scouted by Bobby Orr, with the former Bruin spending evenings with the Dubbin family offering sage advice for their son’s career.

Luke played two years for the Couchiching Terriers of the Ontario Provincial Junior Hockey League and, while injuries limited him to only 78 games, he still managed to amass 85 points. He was also voted Rookie of the Year after his first campaign. At the Ontario Hockey League’s Entry Level Draft he was drafted 45th overall by the Plymouth Whalers. Opting not to jeopardize his education options, in 2003 he choose to attend Western Michigan University where he played in four NCAA Division 1 games. That year in order to advance his skills and to gain exposure in the hockey world, he left WMU to play for the Sudbury Wolves of the OHL, a team who had earlier traded for his rights from the Plymouth Whalers. Luke played 101 games over two seasons for the Wolves accruing 41 points. When his OHL career finished, he used the OHL education package to enroll
at Wilfrid Laurier University where he played his first year of eligibility with the Milton Icehawks of the OPJHL contributing 16 goals and 30 assists in 40 games. For the following three seasons, 2006 through to 2009, he played 63 games with the WLU varsity team, the ‘Hawks”. During the 2007‐08 campaign they were Western Division Champs with a 22‐5‐3 record and won the Ontario University Athletic Association Silver at the Queens Cup. At the Canadian Interuniversity Sport Nationals, the Hawks suffered a loss in the Semi Finals in the 3rd overtime period against the host team from Moncton. Throughout his university career Luke volunteered to assist in the schools recruitment program for potential players; therefore, in his final
year of university, and with his playing career over, Luke was asked to go behind the bench as an Assistant Coach thereby getting his first taste of coaching.

After graduating and receiving a teacher’s certificate, and securing teaching employment in Midland, Luke started coaching in the Midland Minor Hockey system. He was the coach of the Midland Centennials Bantam Rep Team from 2011 through to 2013, leading them to the OMHA finals and being named Coach of the Year in both seasons. In the 2013‐14 hockey season, Luke was the Coach for the Midland Flyers Junior ‘C’ hockey club before moving up to fill the role of Assistant General Manager. 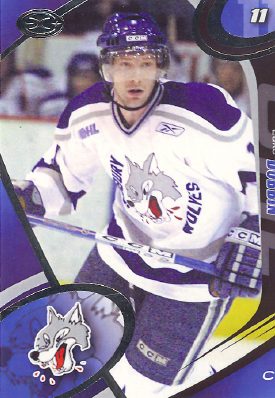