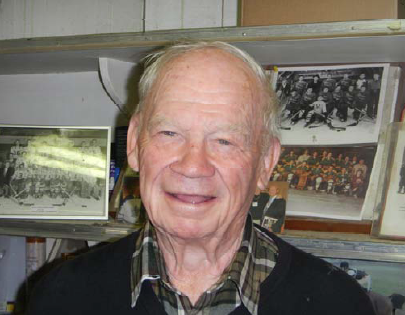 Jimmy ‘Chickens’ Johnson started his athletic career in Midland; a journey which led him to playing junior and professional hockey in Canada and the United States. Upon returning home and recognizing there was an athletic void in the community he, with brash entrepreneurial flair, started up a local Intermediate ‘A’ hockey team and a Senior ‘B’ softball team. Jimmy played his minor hockey in Midland and what he lacked size, he made up for with his grit, stamina and notable rugged play.

In the 1951‐52 season, Jimmy played 45 games for the Oshawa Generals of the Ontario Hockey Association. The following year a bout of appendicitis side lined him for the season. In the off seasons he answered the ‘call of the sea’ with employment on the Canadian Pacific Steamship Company’s, S S Keewatin sailing between Port McNicoll and Port Arthur/Fort William. In 1953 Jim once again commenced his professional career playing in Pennsylvania for the Johnstown Jets in the International Hockey League and then his final two years in New York with the Clinton Comets of the Eastern Hockey League. While completing courses in commercial and agriculture at the Clinton Central High School with a view of attending upstate St. Lawrence College, he nurtured friendships with young and old alike in a hockey crazed community of 1600 folks. Attendance at the Comets games ranged up to 2500, as fans from neighbouring Utica also followed the exploits of the team. It was through these hockey stops that Jimmy acquired business and marketing acumen that would later be utilized when he developed hockey and softball teams in Midland. In the latter part of the 1955‐56 hockey season Jimmy played for the Marathon Mercuries and helped them win the North Shore Championship.

It was also through these stops that Jim met a number of players that he was able to call upon when he returned to Midland and started up the Midland Flyers Intermediate ‘A’ hockey team. Jim assembled the team and in the initial years played alongside local hockey luminaries and imports such as Ted Brady, Murray Yorke, Buzzy Deschamps, Morley Spiker, Terry Moore, Harvey Benoit, Red Fleming, George Westfall, Ray Gariepy, Ron Hurst, Cal Hatt, Blake Ball, Tom O’Connor, Chuck Jewell, ‘Red’ McLean, Dave Nicholishan, Gary Lawson, and Edgar Dorion, to name a few. He also called upon Fred Rutherford to fill the role of General Manager, Dr. C. A. Talbot for the medical needs and Wally Hook as Treasurer.

Jimmy was also responsible for starting up the Midland Flyers Senior ‘B’ softball team that played in the Orillia District League of the Ontario Amateur Softball Association. The roster included a nucleus of local athletes, some that also played hockey with Jimmy on the Intermediate Flyers, and area imports including Terry Moore, Murray Yorke, Gord Blake, Aurel Ley, Don McDonald, Gary Keiller, Gene Rouselle, Harry Bywaters, Dan McHugh. As a result of a chance meeting in a hotel in North Bay, the player roster was further augmented with the signing of Bob Grier, an import pitcher from Detroit, who regularly and with ease fanned opposing batters. His personal best was 14 in a game and in another match Grier went 13 straight over four plus innings. In the off season Grier was the Midland Flyers goal judge, in the visitors end, with clear instructions from Jimmy to ‘throw the red light on’ even when the puck went off of the cross bar or the goal posts. The Midland team was competitive in their league play as well as participating in play downs against teams from Toronto, Hamilton, Oshawa and East York and winning the local champion ship, only to lose in the Ontario Amateur Softball Association finals.

Jimmy’s active involvement as an owner, player and coach with both of these teams only lasted for three or four years; but the respective team organizations continued on. Johnson was the architect of two local sports teams whose legacy lived on well into the 1970’s.