Born in Midland in 1895, Herb Drury is best known among hockey historians as a member of the U.S. Olympic hockey team that competed in the first Winter Games in Chamonix, France, in 1924.

According to the web site, Legends of Hockey, Drury’s U.S. squad won its preliminary group, defeating Belgium 19-0, France 22-0, and Great Britain 11-0. In the medal round, they blanked Sweden 20-0 before losing 6-1 to Canada, earning the silver medal. Drury scored an amazing 22 goals and three assists for 25 points in five games. He scored the one goal for the U.S. in the gold-medal game against his native Canada.

Prior to joining the U.S. team, Drury had begun his hockey career with the Midland Seniors of the OHA senior league in 1914-15, then moved to Port Colborne of the same league the next season. In 1916-17, he joined Pittsburgh of the USA Hockey Association, where he stayed until 1924. He served in the U.S. Army in 1918- 19 and was granted U.S. citizenship upon his honourable discharge from the military.

After the Olympics, the five-foot-seven, 165-pound Drury returned to Pittsburgh, signing with the NHL’s Pirates in September 1925 and played for them for five years. Described as a “flashy and temperamental player,” his best year was 1927-28, when he had six goals and four assists in 44 games. In 1930, he followed the franchise to Philadelphia where they became the Quakers. He played 24 games for them, recording only two assists.

In all, Drury played 213 games in the NHL but he will be best remembered for his high-scoring performance in the first Olympic hockey tournament ever held.

Herb Drury was the brother of U.S. college football star Morley Drury, a fellow honoured member of the Midland Sports Hall of Fame. 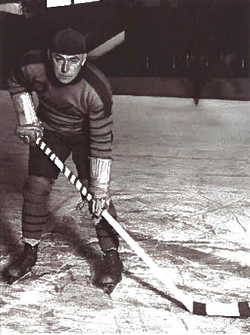