In 1927, 70,000 fans in the Los Angeles Coliseum rose to their feet for a 10-minute ovation to acknowledge the last game played by the University of Southern California football star known then, as today, as “the noblest Trojan of them all.” He didn’t disappoint them, running for 180 yards and three touchdowns against the University of Washington. That raised his season-long rushing total to 1,163 yards, a USC record that would remain unbroken for almost 40 years.

That gridiron great was Morley Drury, born in Midland 24 years earlier but who moved as a child with his family to Long Beach, Calif. As a teenager, he worked in the shipyards to put himself through high school and didn’t make it to USC until the relatively advanced age of 22. But he made the most of the opportunity, lettering not only in football, but also in hockey, basketball and water polo.

Six feet tall and 185 pounds, Drury led USC to an 11-2 record in 1925. According to Sports Illustrated,”the following year, he had his team headed toward an unbeaten season when he injured his knee and, on crutches, watched Southern Cal fall to Stanford 13-12.”The loss meant USC would not play in the Rose Bowl, a dream of Drury’s that would never be realized. In his three years at USC, the Trojans were 27-5-1.

In addition to being the team’s captain and an all-American in 1927, he played quarterback on offence and as well as defensive halfback. In one game against Stanford, he ran for 163 yards on offence and intercepted five passes on defence. He was the first 200-yard rusher in the school’s history.

Drury, who died in 1989, is a member of the U.S. National Football Foundation College Football Hall of Fame and the USC Hall of Fame. He was one of only two players named to the all-time Pacific Coast team (0.J. Simpson was the other).

Morley Drury was the brother of hockey star Herb Drury, a fellow honoured member of the Midland Sports Hall of Fame. 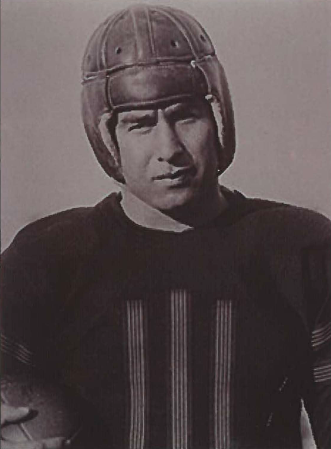 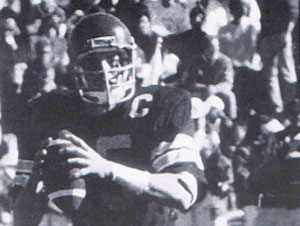