Born in1923, Waples is said to have started his career at the age of 12 on a muddy track in Sundridge On. that would not bear the weight of a sulky driven by his father, Jack, who was double Keith’s size. When his career ended, he would be credited with more than 3,200 victories although the accurate number will never be known because of poor record-keeping in the early days. Most of those wins were in Canada, as Waples preferred to race north of the border.

Jack Waples was a keen harness-racing fan and his family lived outside Victoria Harbour, coincidentally near where J.T. Payette, a foundry owner from Penetan-guishene, raised his standardbreds.”I guess you’d say Mr. Payette delivered my weekly sermon,” Waples told Hoofbeats magazine in 1973. “On Sundays after church he would be out at my dad’s farm and he and my father would talk horses all day. I didn’t miss a word they said.” Of that there is no doubt.  2008

In 1959, Waples became the first to break the two-minute barrier in Canada with Mighty Dudley (1.59.3/5). Other highlights included winning the Roosevelt International Trot in 1962 with Tie Silk, and the famous Little Brown Jug with Strike Out in 1972. That year, also with Strike Out, he won the Adios Pace and Prix d’Ete.

John Hayes, an American who co-owned Strike Out with two Canadians, had a simple answer when asked why they chose Waples to pilot Strike Out in the Little Brown Jug, one of harness racing’s iconic events. “For damn sure, he’s the best harness race driver up there [in Canada],” Hayes said. Also a successful trainer and businessman, Waples and his partners opened a track in Orangeville, Ont., and later in suburban Van-couver in the 1970s. 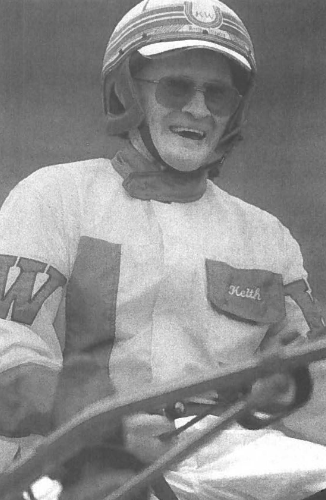