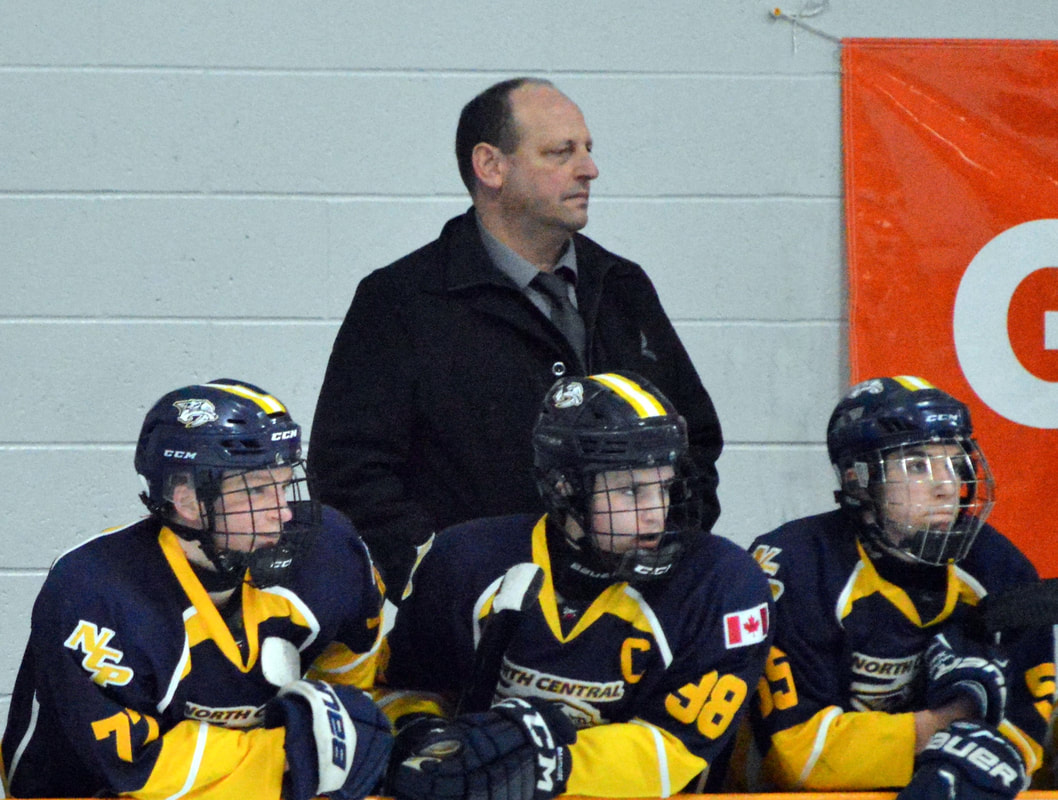 Dave Bressette is a sports and recreation builder in every way. Those knowing Dave would think that he was born and raised in a hockey rink. As a youngster he was enrolled in the Midland Minor Hockey Association starting with Tyke hockey and continued through to the Midget level. He then graduated to junior hockey first playing for the Midland Centennials from 1985 to 87, then onto Aurora for the 87-89 seasons. In those later years he was also playing for Seneca Collage and was
named the teams MVP in his last year.

After graduation Dave started as an attendant at the Wasaga Stars arena before assuming the managers role at the Midland Centennial arena.
When Dave was playing for Seneca Collage he realized what a difference a good coach could make for a team, and the players. He learned from his head coach George Burnett, who became is mentor; the art of coaching. He learned about recruiting, scouting, what character to look for in a player and how they could into fit the script of a well-organized and assembled hockey team. In 1992 Dave started his coaching career when he became the Assistant Coach of the Midland Jr. ‘C’ Flyers. Then he transitioned to an Assistant Coach with the Midland Novice Rep BB team winning numerous tournaments: The Georgian Bay league, the OMHA Novice BB East and Georgian Bay Championships.

The following year he was the Head Coach of the OMHA Atom BB Championship team which won the Georgian Bay league again, several tournaments and were Medalists at the International Bell Capital Cup and Semi-Finalists at the International Silver Stick. The next year Dave
was back as the Head Coach of the Midland Novice BB Rep and once again lead them to the Georgian Bay league and OMHA
Novice BB East Championships. The following year Dave was the Head Coach of the Midland Atom BB Rep and once again they won the Georgian Bay league, several tournaments and were Regional Silver Stick Tournament Champs, International
Bell Capital Cup Champions, Silver Stick Finalists and OMHA Atom BB Champions. Dave concluded his Midland years with 4 OMHA championships.

Dave then took on Coaching the Minor Pee Wee AAA North Central Predators Team and placed 3rd in the seasons standings. The following year the team performed better beating 1st place Richmond Hill and then Peterborough to move on to the OMHA tournament only to lose to Niagara for the Bronze medal. Moving up to Minor Bantam AAA North Central Predators Team his team placed first in the league with a strong winning season but lost in the second round of the playoffs. In the 2017/18 season Dave coached the AAA North Central Predators Major Bantam Team to a fi rst place regular season and an undefeated playoff s, and winning the Bronze medal at the tournament. The team then hosted the OHF Bantam Championships, finishing third in the round robin and coming up short in the Bronze medal game. Dave’s stellar coaching career will be long remembered in the community hockey circles.