Successful hockey teams rely on “team players” who exemplify a team-first attitude to win championships. Chuck Henderson was born in Midland in 1934, honed his hockey skills in his years playing in the Midland Minor Hockey Association, and turned those skills into championships. As a youngster Chuck was a member of the Midland bantams which won the Ontario championship in the 1947-48 season. That season proved to be the jumping-off point for Chuck’s hockey career and he remembers that it was a great thrill to win the title on Midland ice. ”We went to Lakefield near Peterborough and lost the first game 8-4,” he recalled recently. “It was a two-game total-goals series and we came back to Midland and beat them 12-1 to win the championship. We had a great team with guys like Ted Brady, Murray Yorke, Doug Wright, Jimmy Johnson and others. We just played great together.” Playing on that Midland bantam team brought Chuck to the attention of New York Rangers’ scout George Montgomery. He signed a “C” contract at age 14 to become the property of the Rangers and he went to try his luck with the Rangers’ junior team in Guelph. Chuck’s swift-skating, hard-working style meshed with the players around him and Guelph finished the 1949-50 OHA Jr. B regular season with a 20-0 record.. “We had a good team and went undefeated in the regular season, but lost our first playoff game,” said Chuck. “We went on to the Ontario championship series but lost to Barrie.” Chuck went on to make the Jr. A Guelph Biltmore Mad Hatters, and by the 1951- 52 season they were a championship contender. The team was stocked with future NHL superstars Lou Fontinato, Andy Bathgate, Harry Howell and Dean Prentice, as well as fine players like Ron Stewart, Ron Murphy, Aldo Guidolin, Alf Pike and fellow Midlander Ted Brady. Chuck Henderson was one of the scoring; stars.. “I think that year I had 50 goals and 41 assists, playing on a line with Ron Murphy and Ken Laufman. We set a Jr. A scoring record for a line, that stood for a long time,” he said. Guelph not only had great players but played a great team game. They went on to win the Memorial Cup, emblematic of Canadian Jr. A supremacy. “We beat the Regina Pats for the championship, but they didn’t give us much trouble. We had our hands full beating the Toronto Marlboros in a best-of-five series, but after that, wc handled most everyone handily,” said Chuck. Chuck’s contributions to the title didn’t go unnoticed. At a recent reunion of the 1951-52 champs in Guelph, Chuck said that former NHL star defenseman Lou Fontinato acknowledged his skills. “When I walked in. Lou said ‘there’s the best backchecker I ever played with’ when he saw me,” said praise from one of the NHL’s top defenders of his day. After finishing his junior career with Guelph, Chuck went on to play intermediate and senior hockey in places like Saskatoon, Kamloops and around his home base of Guelph. When a pro hockey career appeared unlikely Chuck decided to return to Guelph and settle down. He married the former Lois Daymond and got a job as a sales rep in the beer industry He and Lois had a son and a daughter who have presented the couple with four grandchildren. Chuck retired in 1995 and he now spends his time around the family pool enjoying his grandchildren. 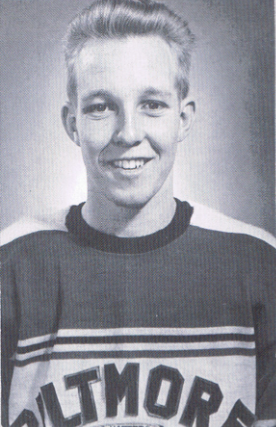