Athletic achievement is not limited to youth. For some people, excellence begins after 40. Jack Young was born in Owen Sound in 1910, and lived in Port McNicoll from age two to 26 before he moved to Toronto. As a youngster, Jack played hockey up to the intermediate level, even spending one season with Midland in the OHA. At the age of 44, Jack joined the famed Granite Club in Toronto and found his game. Was curling the reason he joined the club? Not exactly. “I signed up to join the club and they asked me what I was going to do, why I was joining,” said Mr. Young recently. “I was joining so I would have a decent place to take my business clients to lunch.” As it turned out, Jack tried curling that fall. He took part in a novice session where they went over the rules and then had the newcomers try their hand at the game on the ice. “I threw one rock and they told me to get out of there,” said Jack. “I was a natural. It just came easily. Ever since then people told me I had a great delivery.” He turned that natural skill into many championships, but his greatest achievements came as a member of the Alf Phillips Sr. curling team that won the Ontario Senior Men’s championship three times (1969-70-71) and the Canadian Senior Men’s title in 1969. It is often said that Alfic Phillips Sr. was one of the shrewdest curlers of all time. He proved his smarts when he asked Jack Young to join his team. “He came to me after we curled together at a bonspiel in the spring of 1967 and said that if I joined his team we could win the Canadian senior championship,” said Jack. “He said to think about it over the summer and let him know. When fall came he asked me for an answer and I said I’d do it under a few conditions. We only curled with the one team and no one else. No women and no bums. He said okay and we went right on like he said and won the title.” The team won its first of three consecutive Ontario Senior Men’s Championships that year and advanced to the Canadian finals in Hamilton. They ended up tied with Gordon Moore of British Columbia after all the regular round-robin games were played. Each team had nine wins and two losses and they met in an extra game to decide the championship. Things looked ominous for the Phillips rink, as Jack recalled. “Both the games we lost we were two up coming home and the other teams scored three in the final end to beat us. We were two up coming home in the final too, but we hung on to win it,” he remembered. There was a little superstition at work as well, although Jack denies being superstitious. “Before the game a lady I know found a penny at the rink and gave it to me, saying it would bring good luck. I put it in my pocket, along with some aspirins, since my knees were really causing me pain and I was living on aspirin. In that final end, I was squeezing those aspirins and that penny in my pocket for all I was worth,” he said. The next curling season Jack and the Phillips rink won the Ontario Senior championship again and were selected to take part in CBC’s Curling Classic televised bonspiel. They ended up beating Bill Muirhead’s reigning World Championship team from Scotland. “Yes, us old men beat the world champions right on television,” said Jack. Jack is a member of the Toronto Granite Club Hall of Fame for his work as a curler and for his long service to that club. For several years he was convenor of curling at the club, and he and late wife, Marjorie, sponsored the Young Seniors Bonspiel there for 20 years. Jack moved back to Midland in 1990, and now he is a member of the Midland Sports Hall of Fame. “This is a great, great honour. Its the proudest thing. I never expected this honour,” he said. 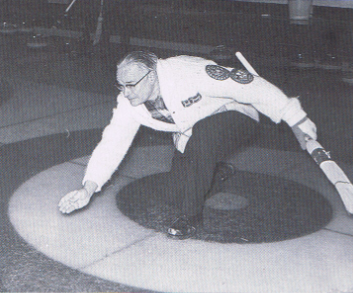