Chester Graham has excelled in so many sports that a case might be made to call him Midland’s Best Athlete. Here are just a few of his career highlights:

These just scratch the surface of what Chester has accomplished as an athlete since he started playing organized sports around the age of seven. But he can’t account for why exactly he played and excelled at so many different sports. “I started playing hockey and baseball because that’s what Canadian kids do I guess,” said Graham recently. “It was just the normal thing to do. My parents supported me all the time, providing transportation and moral support.” It’s even more difficult for Chester to pinpoint the highlights of his career. “It’s tough and I’ve thought about it a lot,” he said. “I am really proud of being able to play university basketball since there haven’t been very many of us from Midland who’ve been able to reach that level. Also, winning the club championship (at NIGCC) in golf is very special to me.” Graham is also fond of his years with the Midland Indians baseball teams of the 60s and 70s, a team he joined as a 16- year-old in 1963. “They asked me what position I played, and I looked around and saw the great players like Joe Faragher at first and Jack Hendrickson at shortstop and Gord Dyment pitching,” he recalled. “Harold Jackson was playing second and he was the oldest, so I said second base because I thought they’d need me there when Harold retired.” His skills as a shortstop and pitcher caught the eye of Midlander Herb Beauchamp, who was scouting for the San Francisco Giants. That led to Chester attending two tryout camps – one for the Giants and one for the St. Louis Cardinals’ system. He had his eyes opened by this exposure to big league baseball. “I learned mostly that I was a Canadian and that unless you could throw the ball 95 miles per hour, you didn’t have much of a chance to make it,” he said. “I didn’t have that kind of velocity.” Nowadays. Chester spends his time giving back to the sports he loves. He teaches at Midland Secondary School and coaches basketball and golf He also referees basketball, runs the Ontario Golf Association kids’ camp at Base Borden, and organizes several tournaments at MGCC. “Sports develops so much for kids, things like communication skills and rapport with teammates,” he said. “Sports introduces them to different things. That’s a unique experience that stays with them. It improves their lives.” Chester participates in the Bunn’s Kids organization because “it gives them a chance to play sports which can improve their lives, and that may not otherwise be available to them due to financial reasons.” Graham noted the contributions of some people who influenced his athletic career. “Jessie Carson was my Grade 5-6 teacher and she used to read to us every day out of sports books like ‘Boy on Defense’ by Scott Young,” he recalled. She used to keep our hockey stats on the blackboard. She took the entire class to Barrie to see the Jr. A Flyers and took me to my first NHL game in Toronto.” Others influences include Lloyd Stackhouse, Mr. Basketball in Midland, Austin Matthews for his interest in refereeing, Les Marsell, the former pro at Midland Golf and Country Club, Paul Quilts; as a coaching influence, and Bill Barnett, for his approach to life. 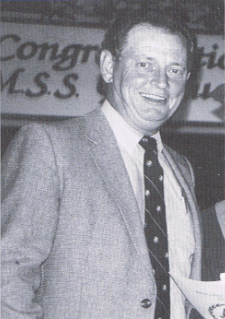