The youngest inductee into the Midland Sports Hall of Fame is Brenda Key who won the Canadian Figure Skating Association national novice dance championship in 1997. Brenda was born in Alberta and moved to Midland at the age of three. She started skating at the Midland Figure Skating Club just one year later. A dozen years later, she’s a hall of famer and a Canadian champion. The 1996-97 skating season started on a high note. Brenda and her partner, Ryan Smith of Orillia, won gold and silver in the novice dance competition at the prestigious Mint° Summer Skate event in Ottawa. They won gold in the free dance and silver in the compulsory dance. That success wet their appetites for more, and they went to the Central Ontario Sectionals and won the Hyland Trophy championship. From there it was on to the Eastern Canadian championships. The results were the same, more gold for this exciting young skating team. That victory enabled them to qualify for the Canadian championships in February of 1997, held in Vancouver. A passionate rendition of the tango carried Brenda and Ryan to the Canadian Novice Dance championship. That brought out some passionate feelings from Brenda as she recalled the thrill of victory recently. “It was amazing realizing that we’d won. It will stay in my mind for a long time,” she said. “It was our first big one. It allowed us to skate in the champions’ exhibition on the ice at GM Place with stars like Shae-Lynn Bourne and Victor Kraatz.” Like all champion athletes, Brenda feels the exhilaration of her competition above and beyond any other feelings when she skates. “When we’re on the ice I feel free, uninhibited. I kind of come out of my shell,” she said. “I feel the competition and I want to put on a show for the spectators. I love to have the crowd enjoy what they watch.” The novice team championship has given Brenda a chance to expand her skating world. Now skating and representing Canada in the junior division, she has experienced international competition. So far the Key-Smith duo has skated at competitions in Banska Bystrica, Slovakia, Chemitz, Germany and in Budapest, Hungary This season will see them venture to St. Gervais, France and Dneipropetrovsk, Ukraine for more international seasoning. Brenda pays the price to be a championship skater. Her usual day during the season starts in the wee hours of the morning when she goes to Barrie to train from 6:30 a.m. to noon. Then she attends Innisdale Secondary School for the afternoon hours. An honour student, Brenda will graduate in the spring of 1999. She has also kept her family life in perspective. Each year she looks forward to her family’s annual ski vacations. In between her own heavy training schedule and school, Brenda finds time to give a little back to her sport as well. In past years, she helped as a volunteer coach at the MFSC and she takes great pride in performing at local ice carnivals and skating shows. Although she currently skates out of the famed Mariposa Figure Skating Club of Barrie, Brenda’s very proud of her hometown of Midland. She credits her local skating coaches Marcia Bell and Cindy LeClair for her early development and for her love of skating. If you believe that history has a way of repeating itself, then this year could be a great one again for Brenda and her partner. They just won the Minto Summer Skate event again. That’s how the whole thing got started back in 1997. 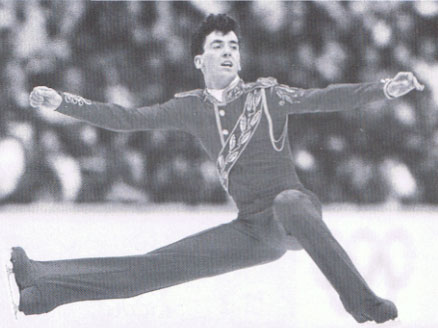