Bryan LaChapelle was raised in Victoria Harbour and due to the fact there was no arena in that community, he became the product of the minor hockey systems initially with Coldwater and then with Midland.

In the 1994/95 season Bryan played for the Midland Bantams and ended the season with the team winning the Ontario Minor Hockey Association, All Ontario ‘BB’ Bantam Championship. In the 1995/96 he played with the Midland Branch 80 Midget team that again won the Ontario Minor Hockey Association, All Ontario ‘BB’ Midget Championship. Bryan was one of the several midgets during the course of that season that was called up to play with the Midland Flyers Junior ‘C’ hockey team. The following year Bryan played a full season with the Junior ‘C’ club that had been renamed the Midland Thunder. Due to Bryan’s hockey abilities he soon graduated to a higher level of hockey and signed on with the Markham Waxers in the
Metro Tier Two Junior ‘A’ League playing for them in the 1998/99 season and in the 1999/2000 season he played for Markham again, only this season they had moved up to the Ontario Provincial Junior Hockey League.

After his junior career had finished, Bryan hung up the skates to attend Laurentian University to study Human Kinetics. After graduation he realized that he still missed the game and at a friend’s urging, he spent that summer in hockey training at the University of Vermont. This led to a tryout with the Greenville Growl who recognized that he needed some game conditioning after being away from the game for three years so they waived him to an affiliate team, the Winston‐Salem TBirds of the South East Hockey League in North Carolina, where he played 28 games and had a recorded 28 points. He then had a one game conditioning stint with the Adirondack Ice Hawks of the United Hockey League in Glen Falls, New York, and finished the season in South Carolina with the Greenville Growl of the East Coast Hockey League where he contributed 9 points over 33 games. In 2004 Bryan started out in Texas with the San Angelo Saints of the Central Hockey League where in 32 games he collected 15 points. Half way through that season Bryan signed with the North Carolina Fayetteville Fire Antz of the South Professional Hockey League where he collected 14 points over 20 games. The team lost in the conference finals in game seven to the eventual CHL Champions. In 2005 Bryan played for the Amarillo Gorillas in Texas in the Central Hockley League where he contributed 8 points over 35 games. In 2006 the Tulsa Oilers of the Central Hockey League in Oklahoma signed him and he played 50 games and contributed for 47 points before a broken foot sidelined him for two months. Bryan’s final year of professional hockey was the 2007 season when he was traded to the Youngstown Steelhounds of Ohio of the Central Hockey League and he notched 28 points over 63 games. Bryan led the team in playoff scoring during their run for the Miron Cup and at the end of the season was awarded the ‘Most Annoying To Play Against Award’ as voted upon by all of the other coaches, assistant coaches and managers of the CHL. Bryan’s hockey career included two OMHA championship seasons at the minor hockey level, five years of progressively better junior hockey and five years of professional hockey. Those last five years included stints with teams in five different leagues where he played 262 professional games scoring 61 goals and contributing 77 assists for a total of 138 points. During his professional career Bryan exemplified his passion and diligence and the no holds barred attitude on the ice by amassing 828 penalty minutes, rightly earning him the most annoying to play against award.

Bryan continues to play local sports, which allows him to keep in touch with his friends and the game he loves. 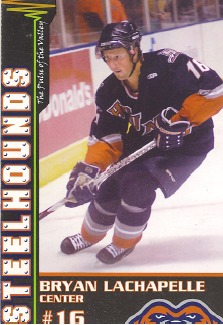