Bev Scott grew up playing minor hockey in Midland in the 1920’s initially on outdoor rinks and then indoors at Midland Arena Gardens when it opened in 1931. His skills were evident and he was selected to play Junior B hockey for the Barrie Colts. Bev played defence for the Colts when the team won the 1934-35 Ontario Hockey Association Junior “B” Championship.

The following year Bev travelled south to the USA to play for the Baltimore Orioles of the Eastern Amateur Hockey League, a loop generally considered to be “semi-pro”. A number of the players that he competed against that year went on to successful careers in the NHL including Murray Armstrong, Muzz Patrick and Hall of Fame goaltender Frank (Mr. Zero) Brimsek. At the end of the playoffs, Baltimore was crowned EAHL champions.

Following his season in Baltimore, Bev returned to Canada and played hockey in Kirkland Lake for a couple of years. He soon returned to his native Midland to play on Midland’s Intermediate “A” teams. During the 1939-40 regular season, while facing the Gravenhurst Indians, Bev and his blue line partner Jack Sagar defended the Midland end of the ice together for the full 60 minutes of a hard-fought game that was won by Midland 4 to 3.

Scott continued to be a smart, tough, puck-carrying defenceman for his hometown OHA Intermediate teams. In February 1946, the veteran rearguard replaced Jack Rutherford behind the bench and finished the season as player-coach.

Following his retirement, Bev coached a number of minor hockey teams in town. With his son Lloyd in the line-up, Scott guided the Midland Midgets to the 1951-52 Ontario Minor Hockey Association Midget “B” final. Unfortunately, their opponents, the team from Elmira would claim the OMHA
championship. 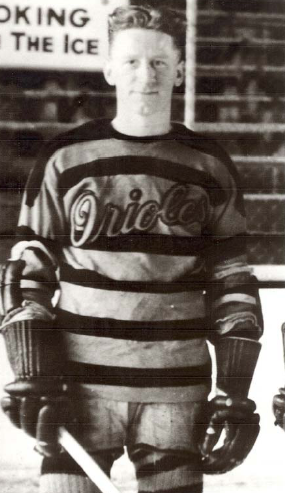