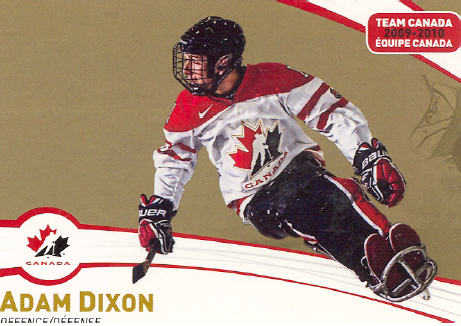 Midland native Adam Dixon grew up playing ice hockey and like many kids his dream was to compete in the NHL. He played every season at the AAA level as a youngster, but at age 10 he was diagnosed with Ewing’s sarcoma. The rare cancer led to the removal of his right tibia, which was replaced with a donor bone, a metal plate and multiple screws.
Determined to pursue his hockey career, he found sledge hockey appealing following his cancer surgery. He took up the sport at 11 with the Elmvale Bears and by 17 he was invited to try out for the national team. He officially joined the Canadian squad for the 2006-07 season.

Career highlights include winning gold and being named the defensive MVP at the 2008 IPC World Championships and scoring the winning shoot-out goal for Canada at the 2009 Hockey Canada Cup in Vancouver. The goal sealed the victory over the United States in Canada’s first nationally televised ice sledge hockey match.

A year later, he was on Team Canada at the Winter 2010 Paralympics placing fourth at the competition in Vancouver. Gold was won again at the 2011 World Sledge Hockey Challenge followed up by silver at the 2012 event.

In 2013, he helped Canada to win the gold medals at both the World Sledge Hockey Challenge and the IPC World Championships.

2014 saw Adam selected to his second Olympic team for the competition in Sochi, Russia. Canada won the bronze medal and Adam was named Defensive MVP. He also won the scoring title and was named one of the top 14 athletes at the Paralympics.

His accolades are no surprise to those who watch or play sledge hockey. He is a leader on the ice in communicating with teammates. Adam has deft passing and puck control skills and his ability to be ambidextrous in his sled is a pioneering move. He is able to shoot and pass with both hands
making him both an offensive and defensive threat.

To quote Drew Rigden, teammate and friend from the Elmvale Bears, “Adam exemplifies the true spirit of what an athlete is all about. He is a fierce competitor on the ice…Off the ice he is an extremely courteous and helpful young man. He is responsible, dependable and trustworthy”.