Bob Merldcy has been involved with the Midland minor hockey scene for over 25 years. Over the course of those years he has coached teams to the International Silver Stick championship, instituted and organized the Midland regional Silver Stick tournament and filled almost every executive position with the Midland Minor Hockey Association, and its predecessor the Midland Little NHL. He has won the George Dudley Award twice, Midland’s highest minor hockey award. He has also held executive positions with Midland minor baseball organizations and ia a lifetime member of the Midland Minor Hockey Association. He is particularly proud of his involvement in the Silver Stick tournament, both locally and internationally. “I love the international flavour of the event. It was almost unheard of for our kids to play teams from the U.S. when we began the program,” he recalled recently. “I really enjoy the time spent at the tournament, here and internationally. I like seeing the kids enjoy the games.” The highlight of his work as a coach was the Midland midgets of 1976-77 who won the International Silver Stick championship and later toured Sweden. When Bob started playing minor sports, he was small in stature and had to work hard for any spot on a team he managed to make. It didn’t deter him. “I always loved sports, so if I didn’t make it as a player, I still wanted to he a part of it as a helper or equipment manager or anything,” he said. Bob helped bring the regional Silver Stick tournament to Midland. Base Borden had hosted it for a couple of years and wanted out of its obligation. When Bob was attending a Silver Stick meeting and given a chance to bring the tournament to Midland, he didn’t hesitate. “Someone asked me if Midland would be interested in hosting it, and I immediately said yes. take it,” he said. “I didn’t wait to consult anyone, I just volunteered because I believed in the tournament. I’ve never regretted it. We’ve had some great tournaments and great players come to Midland because of it.” He has been an international director of the Silver Stick tournament for many years, as well as continuing to organize and run the regional tournament here in Midland. What has been his mark on the Midland minor hockey scene? Bob has a humble opinion of what he’s done for Midland sports. “I hope as a coach people saw me as fair. The biggest reward has been seeing some of the kids I coached come back and help Midland minor hockey,” he said. “My involvement has always been a team effort. There were lots of people over the years who contributed.” Bob sums up his career by stating his beliefs in hard work and dedication. “If you work hard, you achieve. What you put into something, is what you get out of it,” he says. It’s a credo that he has lived with and shared with Midland through his service to minor sports here. Bob still works for the Midland Parks and Recreation department and lives with his wife Carol. His children, Tim, Dave, Linda and Robin have all been involved in sports over the years. Now their children are providing Bob with his local sports enjoyment. I give a lot of credit to my family for their support over the years,” he said. “One thing was certain, they always knew where I was if I wasn’t at home. They just had to call the arena.” And it was there that Bob Merldey has left his mark on Midland’s sports scene. 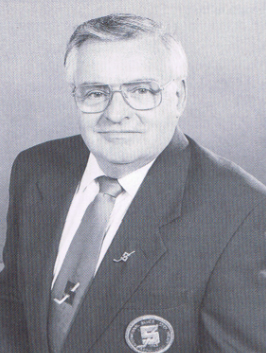