You might say that Bill Jones Sr. got a calling to do his part for local sports in Midland. In 1950, Rev. Len Self was looking to get the Little NHL program underway in Midland. He caught up with Bill outside of church one Sunday that year and recruited him. “He came up to me after church and asked me to help and I guess I couldn’t say no to him,” recalled Bill recently. “He wanted to start a hockey league for all boys to play, not just rep teams, to give them all a chance to play. I agreed with him.” The Little NHL program took off once these two dynamic men got to work. They had enrolled over 150 boys the first year and within two years there were over 500 kids involved. The two men did a lot of legwork to get the program off the around. “To raise funds, we’d canvas Midland looking for donations. I’d take one side of King Street and Len would take the other,” said Bill. “We started out with just sweaters and the kids would wear whatever they had, pants or equipment or whatever. It took about a week after we started Little NHL to become a reality.” This was the beginning of a lifelong love for Bill. He has been active as an executive and coach in Midland minor hockey for over 50 years. Why did he do it so well for so long? His answer is simple. “It just got in my blood. I loved being a part of it,” he said. “I don’t regret one minute of it.” Some of his highlights over the years include winning the 1963-64 Ontario Senior Girls hockey championship and the All-Ontario peewee championship the same year. He also fondly recalls an unexpected stay in a restaurant on his way to the Silver Stick tournament in 1979. “We ran into a nasty snowstorm around Woodstock on our way to Sarnia to play in the tournament. We ended up staying there snowed-in for 19 hours. We met people from all over and ended up having a great time,” he said. Bill’s wife Isobel, at the time, wrote a story for the Midland Free Press describing their adventures at the restaurant. The team went on to win the Silver Stick championship to top it all off Bill also was instrumental in organizing the Georgian Bay Minor Hockey Association, getting teams from Collingwood, Meaford, Owen Sound, Thornbury, Elmvale, Penetang, Parry Sound and Midland together to play an organized schedule. It was a chance for house league teams to play kids from other centres. When asked about the highlights of his career, Bill hesitates to name any single event, but recalls all the fun he had along the way. “We were just ordinary folks haying fun. I recall so many incidents in any number of games that mean a lot. “I loved watching the look on kids’ faces when they got a trophy,” he said. “I still get stopped on the street by adults who once played on one of my teams and that means a lot.” As a reward for his many years of service to Midland Minor Hockey Bill Jones Sr. was made an honorary member. The description of the award in the MMHA constitution perhaps best describes Bill’s contributions to the sport he loved. The constitution reads: “Life member is the highest honour that can be bestowed by the corporation and it shall be awarded only for exemplary service.” It couldn’t have been awarded to a more deserving individual than Bill Jones Sr. 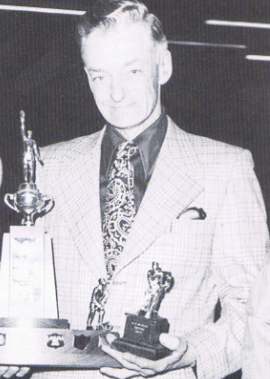