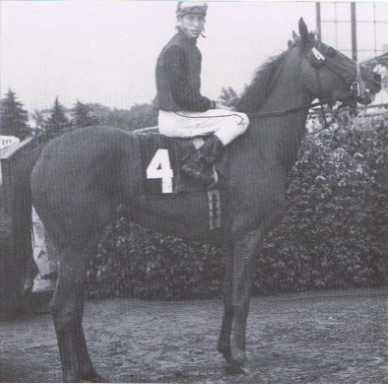 Arthur Richard ‘Arty” Goneau is living proof that if you chase your dreams, you can make them come true. Arty was born in Midland on May 13, 1958, and he was always small for his age. Too small for football or hockey. The last kid that got picked for a team of sandlot baseball. But not everyone saw Arty in that light. Don Howe, who ran the Midland A & P grocery outlet, didn’t care how big he was. He hired him to work there after school and in summers. He established himself as a hard worker and stayed there for three years before chasing his dream. There was another who saw Arty’s potential. Arty’s uncle used to look at him when he was young and say ‘there’s money in you kid’,” recalled Goneau’s mother Inez recently. “He was the first one who realized that it’s the size of your heart that counts.” From a young age, Arthur grew to love horses, even owning his own horse as a child and keeping it at McConnell’s farm locally. It is likely here that the inspiration to become a jockey struck him. In Grade 10 he got the idea to go to Woodbine to learn the jockey’s trade, but his parents Neil and Inez wanted him to finish his high school education. He complied, but when graduation day arrived, Arty convinced them to take him to Toronto to apply for work at Woodbine Race Track where he was accepted into the apprenticeship program. He rode one race at Woodbine before becoming one of the fastest apprentices to gain a mount. “Mr. Irwin, the personnel director at Woodbine told us that making it as a jockey would be very tough. But he also said that Arty came from a good family. When Arty was accepted into the apprenticeship program, Mr. Irwin told us to come get him each month and take him away from the race track atmosphere,” said Mrs. Goneau. Arthur moved from Woodbine to Fort Erie Race Track and continued to be a “bug boy” since he was too light to be a jockey. “Bug boy” is the term used for the apprentices who work out the horses and do the fetching for their employers and other jockeys. It was on October 2, 1980 that Arty’s jockey career took flight. It was on that night at Fort Erie that Arthur Goneau, aboard Double Vibration, broke his maiden and won his first race. Art’s riding took him to many of North America’s finest tracks. He has raced at Woodbine and Greenwood in Toronto, Fort Erie and Assiniboia Downs in Winnipeg, before moving to the U.S. and mounting up at famed tracks like Churchill Downs, home of the Kentucky Derby, and Aqueduct in New York. On Feb. 9, 1985, Arty established himself as a leading rider anywhere. On that night at Latonia Race Track in Kentucky, Arty was aboard four winners in a 10-race card. He became just the 17th jockey in history to do that. Arty continued to ride and win at various tracks throughout North America. He rode extensively at Canandaigua’s Finger Lakes Track in New York and in Cleveland before settling in West Virginia and riding mainly at Waterford Race Track. In the late 1980’s, Arty got the thrill of his career when he raced against the legendary Willie Shoemaker in a benefit event, finishing second by a narrow margin. Arty retired from competitive racing in 1995. A lifetime of racing has taken it’s toll on his body. A broken leg suffered at Woodbine and wear and tear on his Achilles’ tendon finally slowed him down. He now resides in West Virginia where he and his wife Mary are raising their two sons, Justin and Gabriel.