From the mid-1940s until the end of the 1960s, Morley Spiker proved to be the touchston for dependability, work ethic and sustained excellence for Midland’s junior, intermediate and senior hockey teams. Even after he had retired from the local hockey scene, members of the media, and player —teammates and opponents alike—when recalling those days, would immediately speak of his magnificent skills and his undying commitment to his home town.

“Morley seemed to go on forever,” said the late Charlie Noquet, also an honoured member of the Midland Sports Hall of Fame who covered Morley’s games for the Midland Free Press. “He was like our own Gordie Howe.”

Born Dec. 21, 1926, in Midland, Morley played Ki-Y league hockey (the forerunner of the Midland Minor Hockey Association and the town’s Little NHL) as a bantam and midget teenager before joining the 1945-1946 Midland Huskies Junior B team. The left-handed shooting centre completed two more seasons with the Huskies. In 1948, Morley joined the Intermediate A Midland Flyers and the team finished the season as the Ontario Hockey Association’s Georgian Bay group playoff champions and provincial semi-finalists. Two years later, the team was renamed the Penetang-Midland Flyers and entered Senior B competition. Throughout the 1950s, Morley was the leading scorer for the Midland Intermediate team called variously the Orphans, the Monarchs, and the Flyers.

However, due to financial challenges and a shortage of players, the team was shelved for the 1956-1957 season. Morley’s talents were in demand and the then 30-year-old signed with the Elmvale Intermediate C Harvesters, helping them to the Barrie and District league’s regular season title.

By 1959, the Midland Flyers were back competing at the Intermediate A level, with Morley providing his patented goal-scoring magic. For five seasons—1961-’62 to 1965-‘66—those Flyer clubs, though offi cially classed as Intermediate A and Senior B, displayed a brand of hockey that was arguably the closest thing to professional that Midland has ever known. Following the disbandment of the Flyers, Morley would anchor the new  Intermediate B franchise, the Mustangs. At age 40, his career had now spanned 20 years, and on March 10, 1967, the town honoured him with “Morley Spiker Night.”

His tenure with the OHA ended with the 1968-1969 Flyers, but he remained part of the club for several more seasons as an assistant trainer, and the team twice made the finals in the Ontario Intermediate A division. Morley was the captain at the old Arena Gardens in 1976 when the 1975 Oldtimers tied a Swedish squad that 20 years earlier had been that country’s national team. That same decade, he and his teammates travelled to tournaments in the Netherlands and Denmark.

Morley Spiker’s career symbolizes the immense hockey achievements this small town has achieved and his place in the Midland Sports Hall of Fame is well deserved. 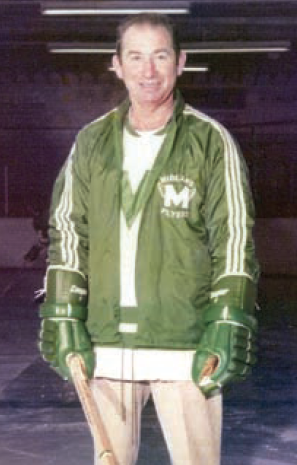