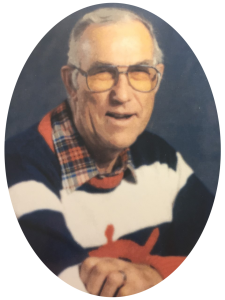 Picture this: a ruddy-cheeked boy, with “Midland” emblazoned diagonally in gold down a blue jersey, with a head full of 1970s hockey hair.

For over a decade and a half, Jim Wallace was the man behind the camera, the eyes of Midland MinorHockey. Born in Midland, Jim was an avid athlete and outdoorsman in his youth. He backstopped the Penetanguishene Intermediates to the Ontario Hockey Association semi-finals in 1948. He also served in the Canadian Navy and the cruise ship SS Keewatin before hiring on with Canada Post in Midland. Jim was also part of the strong corps of volunteers that was the backbone of minor hockey and baseball in town.

Jim’s long tenure as the unofficial ‘official’ photographer of Midland Minor Hockey came about almost by accident. An accomplished wildlife photographer, Jim decided one day in 1966 to step onto the ice after the hockey game of his six year old son Fred, to snap a quick picture. A pair of parents from Fred’s team witnessed the scene, and asked Jim if he would mind taking a photo of their sons as well. Several more parents made a similar request, followed soon by parents of another team, and before long, Jim was in demand as the photographer of record for all teams that took to the ice at the old Midland Arena Gardens. House league teams, rep teams, and even the Jr B Flyers, and their Jr C successors the Centennials, were all captured by Jim’s lens. One of his photos was featured in Val James’ book Black Ice, James’ account of himself as the first U.S.-born African American player in the NHL, taken during his days as a Flyer. It has been estimated that Jim took over 6000 photos of Midland hockey teams and players, a collection now carefully housed for posterity in the Huronia Museum.

Jim’s photographic talents were not limited to the ice. His love of nature and keen eye for detail produced many professional-quality shots of wildlife and the southern Georigan Bay landscape. But it was his work on the ice in Midland, with the challenging lighting and old bench seats in the background, that has lived on the longest, and to this day, there are many former Midland Minor Hockey players who have Jim Wallace pictures stored in well thumbed-through old photo albums. Not only do those players live on in Jim’s crisp colour photos, so does the stately old concrete building in which they all played.

Jim Wallace left an important legacy to the town of Midland. His memory deserves its place in history alongside his photos